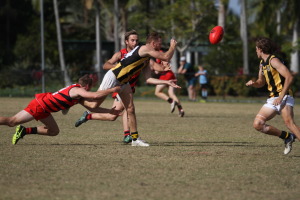 The Burleigh Bombers hit their straps after quarter time yesterday at Bill Godfrey Oval to dent the Tigers hopes of making the 2017 finals series.

The Tigers got off to a good start but were unable to capitalise on the scoreboard in the first term going in to the break with a sixteen point lead but plenty of momentum. The early loss of Jack and Jordan Morrison to injury was a blow to the Tigers defence and ability to run the ball.

It was all Burleigh though in the second quarter with their bigger bodies able to crash through tackles and deliver the ball with precision into their forward fifty. The work of Tom Stevenson down back thwarting the Tigers attack and the strong leads and accurate finish of Terry Knight up front was the difference as the Tigers struggled to make an impact in the second and third terms.

Tigers veteran Sam Paterson did everything he could to will the Tigers on as he has done for many years while Zac McLean also tried to get the Tigers going forward.

The Bombers pushed out to a twenty point margin at half time having kicked seven goals to the Tigers one in one of the toughest quarters for the visitors all year.

Fraser Thompson had plenty of work to do in the Tiger’s defence along with Dean Hartley as they did their best to contain the weight of quality entry.

The third quarter was another difficult period for he Tigers as the Bombers once again bullied their way forward to continue to control the game.

At the last break coach Clint Brunnenmeyer pleaded with his team to give it everything to bridge the six goal margin facing them.

The Tigers started well with two goals but the gap proved to be too much as the Bombers stepped up to kick six goals of their own.

In the end the Bombers kicked away to a very comfortable win to put the Tigers season almost to the death.

Despite the result, the Tigers still have one more statistical chance of making the final five if they can win against Noosa on the road and other results go their way. The last few weeks have been some of the most challenging for the club in many years with an endless run of injuries impacting on the ability to field the best team but the effort has never been lacking.