Tigers go down fighting to the Pumas 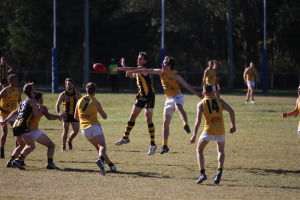 The Tigers battle to stay in the race for the finals took another blow yesterday with a loss to the Springwood Pumas leaving just two games to claim the last spot in the final five. The Tigers have now slipped to sixth position but with Caloundra, Coorparoo, Mayne and Yeronga all on 36 points and spread from fourth to seventh it is there for the taking.

In another week of list management the Tigers fielded the best 22 available against the Pumas while the injury and absence list has not got any shorter at this critical time of the year.

The Pumas got off to a quick and lively start jumping to a six goal lead at the first break as the Tigers did all they could to stop the momentum. The home side were under enormous pressure trying to get some quality entries into the forward line. The Tiger midfield appeared to have no answer for the pace of Rowan Page from Springwood as he dominated the first quarter and put the defence under constant pressure.

The Tigers regrouped at the first break and put in place a plan to arrest the Pumas dominance. The plan worked well with an even quarter from both sides and some cause for optimism that the deficit could be pulled back.

Jack Collings and Zac McLean were getting some more of the ball in the middle but while Sam Nevins was dominating the taps it was still very difficult to achieve an effective clearance.

After the main break it was Andrew Housego who once again came to the fore with a towering mark in the goal square early in the third quarter and a goal which sparked the Tigers to life with a five goal quarter but the Pumas managed to score an equal amount to keep them safely in the lead heading into the final quarter.

Tom O’Malley was the Tigers best in defence and on the day holding the Puma attack in check despite the amount of ball they had on offer.

In the end, despite a tremendous effort by the home side to fight their way back, the Pumas held on to their lead.

The Tigers now have a very tough finish to the season with coast to coast road trips to Burleigh and Noosa.