Tigers too strong for Bond Uni 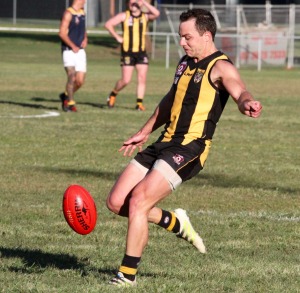 The Mayne Tigers were too strong for Bond University yesterday storming home in the end with an eight goal last quarter blitz to record another critical four competition points and stay in touch with the ladder leaders.

Whilst the Tigers have been losing some of their most valuable talent every week now for several weeks through injury and promotion they were still able to put in a very good four quarter effort with everyone stepping up to the challenge.

In the 100th game for Todd Banfield, the Tigers were determined to give him something to remember. A very popular utility for the Tigers, Banfield has waited fifteen years to record this milestone having made his debut in 2002, but a 96 game stint in some of his best years for the Sandgate Sea Hawks protracted this occasion. Nonetheless it was no less sweet for the former Tiger junior whose family all turned out for the momentous day.

For the second week in a row, pocket dynamo Corben Sellen topped the goal kicking table with a six goal haul in a best on ground performance which set the team alight. Adam Mueller was able to kick a further five goals in a long list of goal kickers which was a pleasing sign for the Tiger coaching staff.

Zac McLean got the Tigers off to a strong start from the middle with twenty one possessions in the first quarter almost breaking fifty for the match showing consistent form as he continues to take responsibility for the Tigers forward momentum.

Despite the Tigers’ ultimate result the Bond University team never gave in all day recording a very good third quarter limiting the Tigers to just two goals showing what they might be capable of when they can field their best list.

The Tigers will enjoy a week off for the representative weekend before facing a surging Caloundra Panthers outfit after the break. It will be hoped that the injury list might shorten over the next few weeks and the Tigers will get a few players back before the finals.

The competition continues to evidence the talent on show in this level of footy with some exciting contests every week. The Mayne Tigers encourage all supporters to come along to the Caloundra game at the Den on the 29th in what promises to be a cracking game. The last time these two sides met the Tigers just got away with a win with a kick after siren.