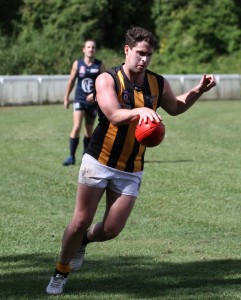 Todd Banfield will play his 100th game for the Mayne Tigers today achieving a long held goal for the popular utility player.

Todd first pulled on a black and gold jersey in 1990 as an enthusiastic five year old following in the footsteps of his father Darryl and uncle Wayne who both forged long careers in Brisbane northside football. Todd’s uncle Wayne transferred to Sandgate as a senior player going on to play over 150 games while Darryl played in three consecutive reserve grade premierships for the Tigers from 1975 to 1977.

Todd moved to Sandgate after under 12’s to follow his family connection when the Tigers were struggling to field a team in his age group and quickly established himself as an emerging talent for the bayside club. He recalls seeing his uncle’s name on the Sandgate Honour Board and being inspired to follow in his footsteps if the opportunity presented itself.

At the age of seventeen, Todd’s ability was noticed by a number of clubs, but it was the lure of playing for the Tigers, just like his father, which brought him back to the Den. In the period between his senior debut in 2002 and 2005, Todd accumulated 75 games for the Tigers before he was enticed back to Sandgate for the 2006 season.

In the period between 2006 and 2013, Todd played 96 games for the Sea Hawks in a very successful period for him.

In another twist in circumstances, Todd was drawn back to the Tigers for the 2014 season with the change in the competition structure which saw Mayne play in the QFA North Conference. Over the last three years Todd continued to add to his senior games but his seasons were interrupted by a number of chronic injuries which would otherwise have seen him achieve this milestone much earlier.

However, he has proudly represented the club in reserve grade to be an integral part of a triple premiership period from 2014 to 2016 emulating his father’s achievements of the 1970’s.

Whilst Todd has played football for the love of the game and not for the record books, he will play his 100th game today at the Den in front of family and friends achieving a record that he will look back on in time with great satisfaction. A strong family connection with a sport they all love has been one of the strongest forces which has driven this much loved Tiger on for so many seasons.

The Mayne Tigers congratulates Todd Banfield on this wonderful achievement and wishes him well for today and for many more games to come.