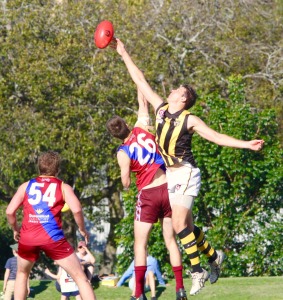 In a game of two halves the Tigers kicked up a gear after the main break to post a strong win against the University of Queensland Red Lions at the University yesterday.

The Tigers were very slow to get their game underway with a very hesitant start and some poor ball handling being a key factor. In another unfortunate start the Tigers once again lost players to injury early in the game with Jordan Morrison and Coach Clint Brunnenmeyer unable to continue which clearly upset their momentum.

By quarter time the students appeared to have the measure of the struggling visitors but by half time the Tigers had clawed their way to a five point lead but were still unconvincing in their approach.

However, it was a very different group of Tigers that emerged after the break to kick five goals without reply in the third term. The Tigers avenue to goal took a different turn with a broad range of the younger brigade able to contribute with solid returns. Xavier Craven made the most of his chance to play in the firsts after many weeks of productive efforts in the reserves with three goals while younger brother Jasper was also in the numbers with three of his own in another consistent all round display up front and in the midfield.

Young veteran Corben Sellen has always been damaging as a defensive forward but he kicked the Tigers home yesterday with five goals in one of his best performances for the club.

Reigning club champion Zac McLean continued his mid season form with another quality return of four goals on the back of a high possession count while down back Jack Gartlan and Ryan Eyles played critical roles in keeping the students attack under control.

In the end the Tigers kicked away with a six goal to four last quarter to record another very important win in the context of their season on the back of last week’s win over Maroochy to go one game ahead of the congestion in the middle of the ladder. The Tigers now sit on eight wins just ahead of Springwood, Coorparoo and Yeronga all on seven wins.

The Tigers will host Bond University next week at the Den and hope to continue their form before the competition takes a break for the representative weekend on the 22nd July.