Yet another epic battle with the Roos 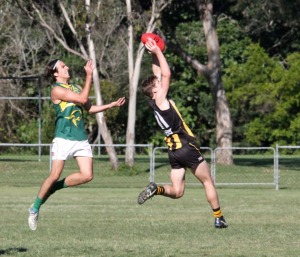 The Tigers outlasted the pressing Maroochy Roos in yet another close encounter between the two clubs at Mott Street yesterday. The Tigers and Roos have fought out some titanic battles in recent years and yesterday once again epitomised the determination of these two teams to continue the rivalry.

The game started in typical fashion with both sides striving to get the advantage but with neither prepared to give any quarter in a fast paced race from end to end. The Tigers ended the quarter with a slender two point advantage after both sides were able to record three goals.

The break did nothing to change the way both sides approached the game but the Tigers stepped up a gear half way through the second term to kick five goals in a ten minute interval which changed the game. Two goals each to Jack Gartlan and Sam Nevins with Lyall Orr chiming in gave the Tigers a four goal lead at the main break and a real sense that they might have the Roos measure.

However, all recent experience meant wiser heads would not be thinking too far ahead. Both sides came out after the main break determined to take the ascendency but it was the defences of both sides which would tell the story for this term and indeed the remainder of the game. The Tigers defence lead by Tom O’Malley and Dean Hartley were called upon once again to hold out the determined Roos while at the other end of the park the same drama was being played out with only one goal scored by each side in an enthralling episode in this long running series.

The Tigers Jasper Craven was very influential on their fortunes all day while Captain Jack Collings willed his team on to hold the line until the end.

The game was set for another exciting finish even though the Tigers had maintained their twenty six point lead at the last change. Past experience has meant that neither club was going to think the game was going to be over until the final second had elapsed.

The Roos threw the kitchen sink at the Tigers in the last quarter to wrest the momentum from them and storm home if they could.

The Tigers were unable to hit the scoreboard while the Roos prime movers of Dzufer and Gale were making an impact with a goal each to press for a last gasp win.

In yet another kick after the siren affair the Roos took the final shot of the game to record six points but it still left them five points short of the Tigers.

The Tigers breathed a sigh of relief to enjoy the win in front of their very excited faithful supporters. The day however did come at some cost as the Tigers lost one of their biggest stars in Caleb Brown during the game to a significant injury which will sideline him for a number of weeks. The club wishes him a speedy recovery and will be pleased to see him up and going again.

The Tigers will take on the University of Queensland next week on the road as this exciting season continues to throw up great contests week to week. The University team also pulled off a last minute win against the rising Caloundra Panthers in one of the other games yesterday setting the scene for another big game next week.