Kings give Tigers the royal treatment 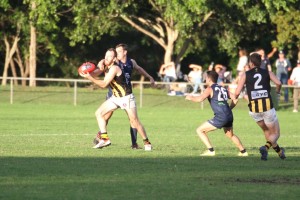 After accounting for the Coorparoo Kings last week at home in the rescheduled round 1 event, the Tigers were unable to reproduce any of that form yesterday in what was hoped to be a groundhog day event at Giffin Park.

The Kings were missing a few stars last week but everyone came out to shine yesterday in front of their heroes from yesteryear in a back to Coorparoo day which featured an old rivalry last seen in 1993 with the Mayne Tigers.

The Tigers only had a few changes to last week’s team which included the loss of pocket rocket Jack Coghlan who lined up for his debut with the Aspley Hornets in the NEAFL but the inclusion of four experienced senior players   made for a reasonably solid group for the return clash albeit that there is still plenty of talent still to return to the training squad.

The Kings were there to play from the first bounce putting the Tigers on the back foot with numerous raids but their ability to make the Tigers pay early was blunted by some poor kicking as they went into the first break having kicked nine points and only two goals. The Tigers backline was under a mountain of pressure with Todd Banfield one of their best in the early part of the game. Unfortunately he was only able to play a small part in the next term before receiving a game ending injury.

Whilst the conditions were perfect for football, the Tigers squandered opportunities in front of goal through the second quarter while attempting to get back in the game. Although both sides had the same number of scoring shots in the second term, the Kings return was much better to assist them to a very handy three goal lead at the main break. Once again the Tigers defence was doing most of the heavy lifting with Tom O’Malley and Josh Harvey keeping their fortunes alive.

In a repeat of the previous week the Tigers did not enjoy a good third term conceding six goals for one reply and an ominous sense of what might be to come.

In what might be a sign of things to come the coach threw the magnets around at the final break to see what might spark the Tigers into life and it was a new energised group that came out to play.

Adam Mueller came to the Tigers with a reputation for his defence as well as his attack and it was clear he enjoyed the opportunity while Caleb Brown went forward reminiscent of seasons past to provide a fresh target. It was also pleasing to see Zac McLean finish the game in solid style with three late goals and an impressive pack mark.

In the end it wasn't enough to bridge the gap but it is always a good sign to run the game out to the end.

The Tigers take on the Yeronga Devils next week at Yeronga.