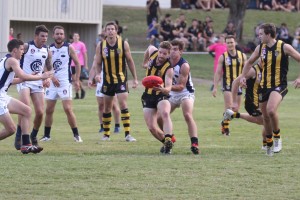 The Mayne Tigers and the Coorparoo Kings made history yesterday when they came together at Mott Street for their first encounter since 1993.

Both clubs have been through some difficult times in the intervening years however they are the reigning premiership holders from the 2016 QFA North and South competitions. This was a belated clash after round one was washed out earlier in the year and was rescheduled to yesterday in a much anticipated affair.

In what is almost becoming cliché the competition continues to excite with close finishes every week and form very hard to determine.

The rescheduled round stripped a number of key players from both clubs but nevertheless there was still plenty of talent available and a very good game was played. In a repeat of last week the Tigers blasted out of the blocks to kick three straight goals to look like they would take the game away from the Kings before it even started. The Kings however were able to stem the flow and slow the momentum to go into the first break with a two goal deficit.

Once again the Tigers kicked away in the second quarter with another burst of goals only to let the Kings regroup and finish the quarter with the run of play if not the lead.

The defence of both teams was playing a significant part as would be expected from two experienced groups. The Tigers Caleb Brown leading the backline as he has done many times was putting on a clinic while his experienced men in Dean Hartley and Tom O’Malley were keeping a lid on proceedings.

The half time staminade did not seem to agree with the home side as they lost their way in the third term but full credit to the Kings who took the game on to rest a slender lead at the last change with the King’s Mitchell Enwright kicking three telling goals, one of which was a beauty from the pocket.

Tigers coach Clint Brunnenmeyer gave his charges considered direction at the last huddle to focus their attention that he did not want a last quarter nail biter again.

The Kings kicked the first goal but that was the end of their run as the Tigers decided that a long kicking and direct game was more efficient and duly kicked four goals with the sealer coming with a few minutes to spare and give the Tiger supporters a comfortable moment to relax at last.

The Tigers and Kings will do it all again next week at Giffin Park as the competition gets back on schedule. The Coorparoo hierarchy are inviting players from both clubs back to their home ground to enjoy a reunion of players from times of yore to celebrate 24 years since the last time the two clubs faced off at Coorparoo.