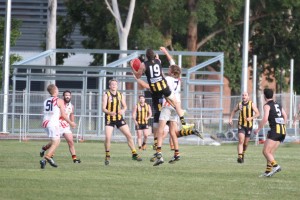 For the third time this year the Mayne Tigers where thwarted by a one kick margin. The Noosa Tigers inflicted the third loss yesterday at the Den to spoil the party at the Mayne Tigers Annual Reunion Day but it was an epic battle which could only be settled with a free kick awarded on the final siren.

The local Tigers started the game with plenty of energy buoyed by celebrations to commemorate Andrew Housego’s 282nd game and club record. The Tigers were determined to make the big Tiger’s day one to remember and with four successive goals to start the game it looked like everything was on track. However the Noosa team had other ideas fighting back to narrow the margin to less than three goals at the first break and ignite the contest.

The Noosa Tigers kicked with the shallow breeze in the second term kicking six straight majors while Mayne team had to work hard to retain a two point lead at half time with the game being played at a cracking pace and the scene set for a nailbiting second half.

The Tigers Captain Jack Collings was doing all he could to will the Tigers on while the defence led by Dean Hartley were under constant pressure to repel the Noosa attack. Once again it was the experience of swingman Caleb Brown which gave the Tigers some critical rebound while he also pulled down several critical marks when it counted.

The half time break seemed to reinvigorate the Mayne team as they came out with renewed energy and a plan to attack at all costs. Unfortunately all this effort only resulted in two goals and six frustrating points when the game was there to be won. In the end the lead was thirteen points at the final break which should have been considerably more.

The Noosa Tigers took the opportunity to turn the tables and go for broke as they spread and ran to challenge the locals to a shoot out. Noosa took a six point lead with a quick succession of goals to have the locals chasing the scoreboard for the first time during this encounter which set the scene for cliffhanger finish.

The arm wrestle was on and it was well into the final minutes of the game that both sides settled on a tied score with neither prepared to concede a point despite the ball travelling from end to end.

It was ultimately a little disappointing that such an exciting and even contest would be decided by a free kick on the siren but the Tigers won a game earlier in the season in similar fashion so can on reflect on chances missed.

Jack Collings was a very worthy winner of the Mick Nolan Medal for his courageous performance. The medal was once again awarded by Nettie Nolan.

The Tigers will regroup to look to next week’s challenge against Coorparoo once again at the Den. The last time these two clubs clashed was 25 years ago in the former State League and through a quirk of the weather gods and the draw the two clubs will play two games in succession.