Annual Reunion Day at the Den this Saturday 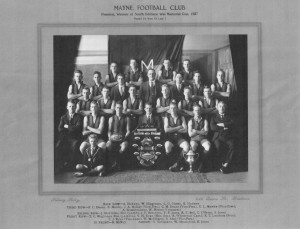 This year marks the 90th anniversary of Mayne's first ever senior Premiership win and the Mayne Tigers are featuring this team in their annual Reunion this weekend on Saturday 3rd June.

The team will be featured through the photographs and memorabilia that are currently held in the club archives.

The club has been looking to make contact with relatives of the team members or anyone who has a connection with the Tigers from this era over the last six months. At present Mayne has contact with about 10 direct descendants. There are already a number of these descendants of the team attending as guests of the Mayne Tigers.

Perhaps you can remember a story from that time or know a relative of the team and support staff. The club would love to hear from you or one of these important people who make up the Mayne Tiger’s story.

A very valuable photograph of the 1927 team annotated has now been located having been sourced thanks to Rod and Glenda Barber. The following names of the premiership players were as follows:

The team went through the season with only one loss to win the club’s first senior flag.

If you are aware of a connection with this famous Mayne Tigers team please can you contact Mayne through Richard Fell on fellrichard@bigpond.com. The club would like to get more of the relatives of this team to the 2017 reunion day on the 3rd June.

The day also includes the awarding of the Mick Nolan Medal for the Tigers Best and Fairest in the senior game. The medal was struck in recognition of one of the Mayne Tiger’s favourite identities who passed away in 2008 and will once again be presented by Mick’s widow Nettie.

All past and present players, family, friends and supporters are invited to attend this important day in the Mayne Tiger’s calendar.