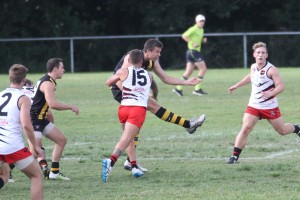 After two tight finishes in recent weeks the Tigers returned to the winners list with a comfortable win over the Burleigh Bombers at Mott Street yesterday albeit after a slow start.

It seemed that the Tigers recent tight games were continuing to take a toll with a sluggish start to their game as they struggled to gain momentum. The Bombers effort of course was a key factor in pressuring their way on to the scoreboard early and their accurate kicking was a key factor in taking them to a two point lead at the first change. They had slipped away to a handy lead but the Tigers clawed their way back to stay in the hunt late in the quarter.

The game opened up more in the second term with the Tigers playing a much more direct game to take advantage of their tall forwards and kick away to a five goal lead late in the term. However, the Bombers weren’t done at that point kicking three quick majors to go into the half time break eleven points down with the momentum in their favour.

In his 281st outing for the Tigers, Andrew Housego showed he still has plenty to offer with customary strong aerial work and a handy three goal effort to lead the scoring for the club. Housego will break the club’s games record next week in a fairytale occasion on the club’s Annual Reunion Day. The record has stood for nearly eight decades so there is sure to be plenty more said about that over the coming week at Tigerland.

Tigers big man Sam Nevins also played an important role for the team’s success with a strong display of tap work to dominate the centre bounce and provide drive around the ground while Jack Collings was once again constructive in his work in the engine room.

The Tigers shifted a gear after the main break to hold the Bombers goalless and kick away to a six goal advantage to set up the finish they needed.

The home side was well served by Jasper Craven in a very handy display of running football while the backline held firm with the ever reliable Dean Hartley and Caleb Brown providing critical rebound.

The Tigers ran out the game with a five goal final quarter to hold the Bombers to just one goal in the second half and secure the much needed four competition points to stay in touch with the ladder leaders.

The Mayne FC will award the much coveted Mick Nolan Medal next week in their clash with the Noosa Tigers at the Den. The Medal was struck in 2008 after the passing of the Tiger legend and is awarded in this important home game as part of the Tiger’s Annual Reunion celebrations.