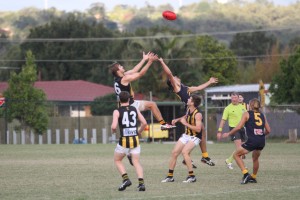 For the second week in a row the Tigers fell short by a narrow margin but this week it was the game that really got away at Lowe Oval yesterday. After leading all day the Tigers surrendered the advantage to the Springwood Pumas who never stopped working hard all day.

The Tigers haven’t played the Pumas since 2013 so there was some considerable anticipation of what the game might bring.

The Tigers got off to a strong start but it was a generally even contest with both sides making strong attacking raids and a collective 10 goals for the quarter. Adam Mueller kicked three straight goals to get his day off to a good start while the Tigers finished with a two goal advantage.

In an equally entertaining second quarter both sides continued in an open game style with the Tigers extending their lead to twenty points and a sense that they might have the measure of the Pumas. The Tigers coach Clint Brunnenmeyer was very influential around the middle creating plenty of forward pressure while Sam Paterson played his usual in and under game keep the Tigers going goalwards.

Up to this point the Tigers were able to maintain the pressure required to keep the ball alive and create opportunities for their tall forwards.

However, after the main break the game took on a new complexion with the ball in dispute and brought to ground more often to make it a dour physical affair. The Tigers started the quarter well with two goals but could not penetrate the forward half from that point. The backline was called upon to defend grimly bringing the experience of Dean Hartley and his back six into far too many contests. Spencer Greville was one of the Tigers best as he tried to ignite the group with his penetrating runs off the back half but the congestion created by the Pumas changed the game.

Whilst it had been a tough quarter the Tigers still maintained a slender five point lead at the last break but the signs were there that the Pumas hard work and pressure approach was stifling the Tigers ability to score.

The Tigers were well served in the middle by Jack Collings high work rate and tackling pressure to create turnovers but the team squandered too much possession with poor decisions when the game needed to be won. In the end the Pumas continued their pressure at both ends of the ground taking some very telling marks in the last line and converting the necessary opportunities up front to eclipse the Tigers within the red period of the game and record a well deserved win.

The Tigers return to the Den next week taking on the Burleigh Bears in a must win encounter.