Another arm wrestle in Roo Territory 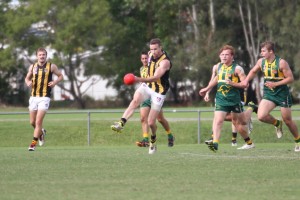 Less than a goal separated the Mayne Tigers and the Maroochy Roos yet again at the conclusion of a traditional hard fought contest at Fisherman’s Road yesterday.

It had been the same all day as neither side gave an inch with scoring almost impossible as they each defended grimly in an enthralling contest.

The Tigers went to the Sunshine Coast with the expectation that it would be a hard fought affair and fielded one of the best sides for the year. The game started as always at a pace with Maroochy early on the board but the next twenty five minutes was dominated by close checking and rebound football.

Caleb Brown was once again at his best with multiple possessions willing the Tigers forward while he supported the defensive line.

By half time the Tigers had grafted a one goal advantage which had been two but for a Josh Norman goal kicked in customary calm fashion after the siren in front of the Roos faithful giving them some momentum going into the long break.

It was more of the same tight uncompromising footy in the third as both sides defences held firm against all effort.

The Tigers Bill Stephens sporting a large head bandage was inspirational in his effort to defend and attack while working across the middle but latterly in his customary back half while Dean Hartley was doing his best to contain the opposition.

There was only a point in the game at the last change with the Roos taking the meagre advantage with their stars in Dzufer and Ryan playing an important part in their game and setting the scene for another dramatic finish.

The Roos got off to a quick start peppering the goals but the pressure was telling on both teams. The Tigers gave away a telling kick in the Maroochy goal square which could have changed the game at this critical time, however they regrouped to bounce back with a goal in reply and the high pressure continued with a goal for goal effort until the final siren leaving the them five points in deficit.

Sam Paterson had been a key to the Tigers hard ball efforts all day but he also recorded three important majors in a game where scores were hard to come by and at the other end the composure shown by the youthful Josh Harvey was inspirational.

The Tigers will line up against old cross town rivals Springwood next week in what shapes as another exciting clash in this close competition.