Tigers give Yeronga Devil of a time 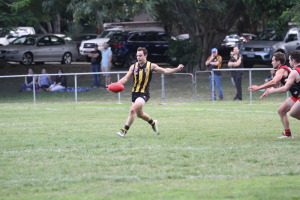 The Tigers clash with the Yeronga Devils at Mott Street yesterday marked the 300th senior game for club legend Andrew Housego setting the scene for a big day. As a consequence of this significant milestone the Tigers were very pumped for the occasion starting the game with their best quarter of football for the season and a six goal blitz leaving the Devils shell shocked and scoreless.

Housego racked up touches at will as he crashed the packs in the customary style everyone has been accustomed to seeing from this champion. He capitalised on the enormous forward pressure exerted by the Tigers peppering the goals with multiple shots. Unfortunately, he wasn’t able to finish the game which will temporarily postpone his challenge on the club games record but it was certainly vintage Housego while it lasted.

The Tigers game was bookmarked by tackling pressure with Corben Sellen and Jack Collings leading the tackle count as usual. The intensity of this pressure kept the game in the Tigers half for most of the game.

Tigers big man Sam Nevins put on a clinic in the ruck to keep the midfield supplied with plenty of quality footy in his best game for the year. Nevins was very keen to give credit to his young protégé Dan Schmidt for the additional support provided with a shared load across the game. Schmidt continued his remarkable start to senior footy with three goals and an athletic display around the ground in a very mature effort.

The Tigers had anticipated this match to be a danger game with the Devils form suggesting they were up and about. One of the key match ups identified early was between popular Tiger backman Tom O’Malley and Devils gun forward Glenn Boyd who has been at his exciting best in recent weeks. O’Malley, a quiet achiever at the Tigers, took the points on this occasion in his customary fashion holding the big man to two goals for the day. It was of course the work of the back six working together as usual which kept the pressure on the Devils attack. The return of Spencer Greville added attacking spice to the Tiger defence while Bill Stephens also provided rebound pressure to get the Tigers going.

Caleb Brown in a vintage display added to the poise required floating across the defence to keep the plan on track and stifle the Devils avenue to goal.

In the end the Tigers recorded a strong win over four solid quarters.

The Tigers travel to Maroochy next week for a grand final replay in what shapes as one of the defining games of the year to date.