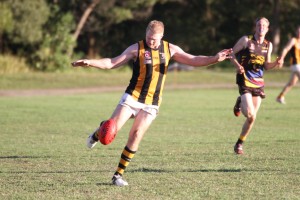 Andrew Housego will play his 300th game of senior football today when he runs out for the Tigers against the Yeronga Devils.

This will be Housie’s 280th game for the Tigers but his amazing record also includes 20 games for the Morningside Panthers. When Mayne sat out the 2000 season in a much publicised affair, Housie went over to the Panthers for one season before returning to his beloved Tigers as soon as things had been resolved.

In an amazing record of resilience, durability and loyalty as coined by Mitch Ferguson in his defining piece on the great man as he approached his 250th game for the Tigers in 2014, Housie has continued on determined to break the Mayne Tigers club record of 281 games held by Albert Hadwen since the 1930’s.

Housie holds the extraordinary record of 11 seasons as Club Captain and equal club record of four Club Champion awards over twenty one years in the upper echelons of community football.

Much more to be said in the coming weeks when this long awaited club record approaches but for now the Tigers once again wish Andrew Housego well for yet another incredible milestone.