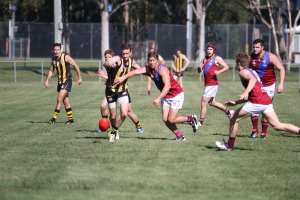 The first home game for the 2017 season was a very close affair against the University of Queensland at Mott Street yesterday with the Tigers having to shift up a gear to get over a very determined opposition.

The Tigers were missing a number of their best players yesterday however the depth in the squad came to the fore with some very impressive efforts from the group when it counted.

Dan Schmidt made his debut for the Tigers as the first Colts player to graduate from the 2016 cohort and he didn’t waste any time letting everyone know that he had arrived. Last week Sam Nevins had to shoulder the ruckwork for the entire game so the presence of some new young blood in the tall department was a welcome addition to the group.

The Tigers had to battle all day against the students who came with a plan which they were determined to execute. After a half of football there was only two points in an enthralling game where both sides worked hard to score with very few opportunities to break away for any open football.

The students went into the main break with plenty of momentum and a spring in their step as they focussed on taking the game away from the home side.

The third term was a further indication that they had found the Tiger’s measure as they kicked seven goals to four in a frenetic quarter with the game opening up at both ends.

Despite the onslaught of the third term, the Tiger huddle was still full of confidence that the game was there to be won as Coach Brunnenmeyer set the scene for his team to step up and run the game out. He followed up his inspirational words with the perfect response by running on to a perfect tap from Sam Nevins out of the middle to kick a long range goal and spark the revival.

The UQ Lions weren’t to be outdone responding straight away with a quick goal.

However it was the Tigers who finished the game with all the run kicking six further unanswered goals to snuff out any further hope for the visitors.

Caleb Brown had kept the Tigers in the game all day kicking four goals to three quarter time but it was a towering mark and goal which put the Tigers in front. He shared the limelight with his new protégé Dan Schmidt as they traded goal for goal to close out the game and record a very good win under pressure.

The Tigers will host the Yeronga South Brisbane Devils next Saturday at home as the tight competition gets more interesting every week..