Tigers up in Coast thriller 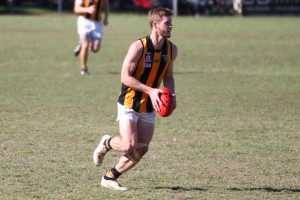 The Mayne Tigers hung on for the closest of finishes on Saturday against the Caloundra Panthers at Caloundra to record an important win and go to the top of the ladder.

The Tigers led all day but were never really in their best form however they were only let play as well as the Caloundra Panthers let them. It was a difficult day for injuries with the Tigers losing Andrew Housego and Josh Griffiths before half time and then the bench being exhausted half way through the third term.

As a result there were plenty of changes required to the set up and maintain momentum to stay in the game which was a credit to everyone.

Adam Mueller continues to prove his worth as a valuable key position utility player being moved to full forward and providing the necessary avenue to goal rewarding the team with six goals in another standout performance.

Despite the loss of some key players the Tigers still went into the main break with a four goal lead and a positive attitude to the game while the Panthers were starting to feel that they were in with a big chance.

As has been the Tigers strength in recent seasons, defence was the key to staying in the contest with Dean Hartley and Tom O’Malley leading the back half under constant pressure. At the last break, the Tigers still held on to a fourteen point advantage partly due to inaccurate kicking of their opposition but also the battle unfolding in the back half.

It was always going to be difficult to hold out the Panthers in the last term with no fresh legs available but all credit to the Tigers as they scrapped as much as possible to still score three goals against a charging opposition.

In the tightest of finishes the siren sounded with the scores level and Jack Coghlan with ball in hand on a tight angle and an opportunity to win the game. He was able to kick the winning point and the Tigers snuck away with the four competition points and were very fortunate to go to the top of the league table.

Credit goes to a Captain’s effort from Jack Collings and Caleb Brown with their experience around the middle of the ground proving invaluable at key times during the game.

The Tigers will take on the University of Queensland this week in their first home game on a newly renovated surface at the Den. This should be an exciting contest with Springwood and UQ fighting out a draw on the weekend to provide further evidence of the tight competition this season.