Tigers up after inaccurate start 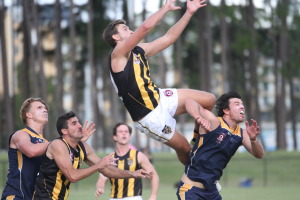 The 2017 QFA Division 1 season finally sprang to life yesterday after a first round washout with the Tigers travelling to the very impressive Bond University ground to play their inaugural match in hot blustery conditions.

The Bull Sharks have been big improvers in recent years working their way up the Divisions so the Tigers were keen to get off to good start.

In a frenetic opening to the game the Tigers peppered the goals but couldn’t get their radar on track in the open windy environment kicking just two goals from seven attempts into the wind to lead by ten points. New recruit Adam Mueller was getting plenty of ball up front but couldn’t capitalise but certainly gave the Tigers a good target which will only improve as the season goes on and the team falls into the rhythm of a new look forward line.

Sam Paterson was once again a driving force for the midfield with his ability to get in and out of heavy traffic to open up opportunities for others while Jack Coghlan was his speedy best on the outside leaving his opponents behind.

The Tigers continued to pepper the goals squandering possession at times kicking four goals from eleven opportunities in the second term with a fluky wind behind them. There was however plenty to like about the amount of ball the Tigers were getting and it was only a matter of time before it all came properly together.

The Tigers held a four goal lead at the main break but looked set to break the game open however to their credit the locals were having none of that and came out firing in the third term to narrow the lead to nine points and set the game up for an exciting final quarter. The Bond team showed all of their talent they have to work with and will be difficult to contend with as they get their season up and running.

It was however all Mayne in the last term as the midfield led by a strong rucking performance from Sam Nevins steered the Tigers to a seven goal quarter and a solid win on the road.

The Tiger forwards finally got their kicking boots on with Zac McLean and Brunnenmeyer kicking critical goals to lead from the front while the backline held almost everything out with Dean Hartley and Bill Stephens doing what they do best.

The Tigers still have some of their best to come back into the side over the coming weeks and the first home game is still a few weeks away yet.

The next game will be at Caloundra after the Easter break with the new season shaping as one of the most exciting for many years.