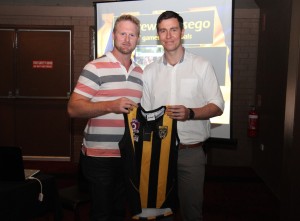 The Mayne Tigers launched their 2017 in fine style in the H Lounge at the Hamilton Hotel last night with sixty two players accepting their playing numbers.

The night was hosted by the club’s biggest identity in Danny Craven who brought his usual passion and humour to the night. Craven rounded out a great night with some pertinent comparisons for the Tigers with the Western Bulldogs 2016 performance also quoting Luke Beveridge and Dr Suess to inspire the club to even greater success.

The Tigers will be led by new Captain Jack Collings who will take over from his cousin Caleb Brown who stepped down after five years in the position as the most successful Captain in the clubs history with three premierships during his reign. Jack has been at the Tigers since 2012 and has accumulated 78 games and two senior premierships during this time.

The leadership group was announced by the club’s very experienced player coach in Clint Brunnenmeyer and includes a mix of young and old but plenty of experience with 20 premiership medals between them all. In addition to Jack Collings, Bill Stephens and Andrew Housego will be Vice Captains while Zac McLean, Fraser Thompson, Dean Hartley and Sam Paterson will round out a very balanced group.

The club’s major Sponsor GVG Design Construct was represented by Sam Gardner who presented the first ten jerseys with evergreen Andrew Housego accepting his much loved number 1. Housego will be looking to break the club games record in 2017 with five games needed to eclipse the record of 281 held by Albert Hadwen which has stood since the 1930’s. Albert’s brother Eddie finished his career at the Tigers on 280 games.

The Reserves leadership group also boasts a lot of experience with club favourite Corey Massingham and Scott Webber as Co-Captains and Stew Settle and Jack Morrison rounding out the leadership group.

The Tigers major signing for 2017 in Adam Mueller will wear number 20 which he accepted from Life Member Glenda Barber who has been involved with the club her whole life with her father and uncle members of the Tigers first premiership team in 1927. Adam Mueller has already impressed in the pre-season playing up forward and kicking a bag of goals but he is very versatile making the coaches job a little easier with a lot of options available with the range of experience evident across the list.

Club President Russell Ditchburn highlighted in his Season Launch address the number of sponsors that had once again come on board for 2017 and thanked them for their generosity. He also noted the extent of work involved in getting the club ready for another season on the back of three consecutive premierships which all goes to make for a continuous unbroken period of sustained effort and persistence.