Tigers go down to Roos in Alpha Sport Pre-Season opener 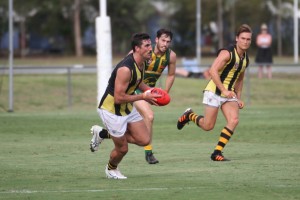 While it wasn’t a great spectacle or a genuine grand final replay at Fisherman's Road there was still plenty to enjoy about the first hit out for 2017 with the Maroochy Roos and the Mayne Tigers showing there is plenty to look forward to this year.

The Roos got off to a flyer with a withering six goal first quarter start kicking with the sea breeze and looked all the way like they were going to blow the Tigers away. However the Tigers steadied the ship to get on the scoreboard for a three goal deficit at the first break.

It was a pretty typical contest between these two proud teams from that point on with both sides only registering a further three goals apiece to the end of the day with neither prepared to give an inch as has been the case for the last three seasons.

The Tigers were impressed with the form of new recruit Kane Tyson who showed plenty of consistent midfield form across the duration of the game while Sam Paterson doled out his usual gritty in and under performance. Corbin Sellen and Jack Collings both provided the Tigers with plenty of defensive tackling pressure to keep the game close and once again show their importance to the side.

Both sides fielded teams well short of the their best twenty two as expected in a March encounter but they each provided the right signs to show they will be thereabouts in 2017.

The Reserves scratch match did not reach any great heights for the Tigers with a well below strength team fielded while Roos look to have added plenty of youth to their squad no doubt drawing on their very successful colts programme over recent years.

The Tigers were however pleased to see the return of young gun and former Mayne junior Lachlan Kirby who showed plenty in the ruck and kicked a handy four goals when up forward showing he has lost none of his form after his year long break. Kirby was a two time Colts Best and Fairest winner in 2014 and 2015 and will be just what the Tigers need for Season 2017.

The Tigers were also able to see a number of other young talent get their first taste of senior footy which bodes well for the new season.