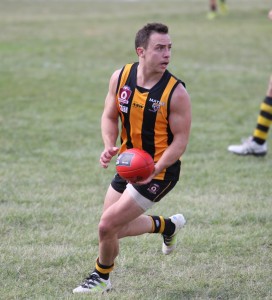 The Tigers will line up in a Grand Final replay against the Maroochydore Roos at Fishermans Road this Saturday in an exciting return to footy for 2017.

The Tigers will field a new look side with several changes to the group over the summer following the retirement of spearhead Luke Faulkner and the loss of Josh Caldow who was forced to return to Melbourne with work commitments.

However, the Tigers are confident that they will still field a strong line up week to week. The Alpha Sports Pre-Season Cup will give the club a chance to look at some youth coming through and the inclusion of new talent.

The Tigers welcome Adam Mueller to the Den in a key signing for 2017. Mueller joins the club with a solid reputation as a key position player who can play up front or down back having played 100 games at Redlands in their NEAFL side and more recently at Morningside.

Coach Clint Brunnenmeyer has been very pleased with the Tigers efforts on the track and will be very interested to see how his charges perform against the form side of 2016 this coming weekend.

The Reserves will also get a chance to blow the cobwebs away in the early game at 11.50am on Saturday.

Tigers fans are encouraged to get along and see how the club is shaping up. The Pre-Season cup continues over three weeks culminating on the 18th March with a final being played for the Alpha Sports Cup.