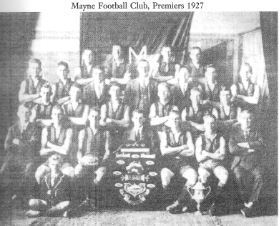 This year marks the 90th anniversary of Mayne's first senior Premiership win – there is a picture of the team in the Mayne Tigers history book “The Tigers – From Glory to Heartbreak” but unfortunately there are no names included against the photo.

However, the following names of the premiership players have been gleaned from club records:

The team went through the season undefeated to win the club’s first senior flag.

The club is looking to make contact with relatives of the team members or anyone who has a connection with the Tigers from this era. Perhaps you can remember a story from that time or know a relative of the team and support staff.

In any case the Mayne Past Players and Supporters Group is going to feature the 1927 Premiership team at their 2017 Reunion Day on Saturday 3rd June this year. They are putting out a call for the relatives of the Team to be their guests on the day.

To this end the Tigers are sending out a call to the widest of the Mayne Tigers AFC family to let us know of any of the team members and any living relatives whereabouts and details.

If you are aware of a connection with this famous Mayne Tigers team please can you contact Mayne through Richard Fell on fellrichard@bigpond.com . The club would like to get as many of the relatives of this team as possible to the 2017 reunion day on the 3rd June.