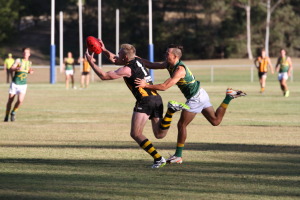 New in 2017, QFA Division 1 Hart Sport Cup combines some of the teams from 2016’s QFA North and QFA South to create a competition spanning from Noosa to Burleigh.

The 18 round fixture sees 84 of 90 home-and-away matches played in the traditional Saturday afternoon timeslot, along with three Sunday, two Saturday night, and one Friday night clash. All the Mayne Tigers games will be held in the Saturday time slot.

The season kicks off under lights on Friday March 30 with a Yeronga vs. Springwood blockbuster at Leyshon Park.

Round 1 also sees 2016 premiers Mayne (QFA North) and Coorparoo (QFA South) square off for early bragging rights on the 1st April at the Tiger’s Den. This game not only represents the clash of the 2016 Premiers, it is a return to a traditional rivalry that hasn’t been played out since 1995 when the old Coorparoo Football Club disbanded and both clubs participated in the QAFL.

Another fixture highlight will be the University Challenge, with University of Queensland and Bond University going head-to-head for the first time.

There will be four 2016 Grand Final rematches across the season, as both QFA North and South Grand Finalists play each other twice.

A four week, five team finals series commences on August 26, with the Grand Final scheduled for the third weekend in September.

ü The first University Challenge in round 9 on Sunday afternoon

ü Noosa vs. Caloundra local derby under lights in round 11