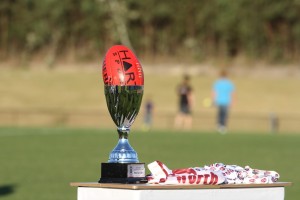 The Mayne Tigers secured their third premiership in as many years yesterday at the Moreton Bay Sports Complex defeating the Maroochy Roos for the second successive year.

The three peat secured a piece of history for the men from Mayne with the club having never been able to achieve this multiple success ever before in its 92 year journey despite seventeen previous flags including six doubles. The win also capped off a great day for the Tigers with the reserves also securing the triple header in the early game.

The Roos have been confirmed front runners all season with a quality list including ex AFL players but the hard working Tigers weren’t over awed. The Tigers list saw some changes since they last went to the mountain with seven changes to the team that won the flag in 2015.

Tigers Director of Football and Co-coach Danny Craven was all praise for his team last night highlighting the changes in personnel and the new look coaching panel adding a new flavour to the playing squad which sparked the group to even greater success. He gave considerable credit to coaching debutant and co-coach Clint Brunnenmeyer who not only steered the ship on field but played an exceptional grand final to lead from the front.

For the second year in a row Tigers Captain Caleb Brown was judged best on ground and was awarded the Mick Nolan Medal from Nettie Nolan in an all Mayne Tigers affair. In the three years of the QFA North Competition, Mayne has been the premiership club and the prestigious medal has also been won by a Mayne player each year with Luke Faulkner winning in 2014.

The Roos certainly came to play and were determined to be physical from the outset in an attempt to unsettle the Tigers but despite the relative youth in the side there was no sense of intimidation as they settled in to accumulating a winning margin. The Roos were able to secure a one goal advantage at the end of the first quarter in swirling conditions which did not really favour either end, but the Tigers moved past them in the second quarter and were never headed.

The Tigers small men in Coghlan and Craven were running rampant on the wings while Faulkner, Housego and Caldow were providing multiple targets up forward.

By half time the Tigers lead was almost three goals and they seemed to have the measure of the game but it was a grand final between two sides that have played some titanic battles over recent years so no early celebrations were likely or required.

The Tigers continued to gradually stretch their lead in the low scoring game to go into the final term for the season with a four goal lead but still there was plenty of respect for the Roos who have proven they can score quickly.

As if on cue the Roos threw everything at the Tigers with a goal to McKenzie and then Bevan to narrow the margin and increase the tension to keep the grand final alive. A steadier from the Tigers Brunnenmeyer who took a mark outside the fifty and coolly slotted it home to ease the pressure only to have the Roos Captain respond at the other end.

The time was running out though and a final diving mark and long range goal to Josh Caldow iced the game with moments to go.

The Tigers season had got off to a spluttering start but once it was up and running it purred to the final game with a well appreciating supporter base breathing a sigh of relief that it had come to this again and the record books could be re-written. The Tigers long history has been littered with ups and downs but this era will forever be remembered for the coming together of so many good people on and off the field who have made these successes possible.