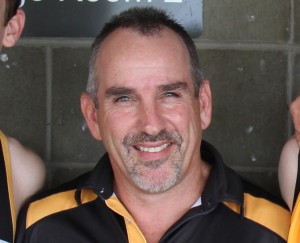 Danny Craven was honoured last night at the 2016 Queensland Football Awards for his successful campaign as the coach of the South Queensland team for their historic win over North Queensland in Cairns this year.

Craven took over the role in this the 150th Year of football in Queensland with the expectation that he could put together and lead a team that would be able to beat the North Queenslanders for the first time in this intrastate competition. He had been specifically asked to take on the role by AFL Queensland because of his extensive experience as an elite AFL player and two times QAFL Premiership Coach. He also had extensive experience at state level coaching. More recently he has been the Director of Football at the Tigers taking the club to two senior and reserve grade premierships in 2014 and 2015 and now a third successive appearance this week for both teams in the Grand Final.

The intrastate rivalry has only been a relatively recent innovation but one that generates plenty of parochial sentiment so the win was very special in this important year in Queensland Footy.

President Russell Ditchburn commented, “The Mayne Tigers are very grateful for Danny’s achievements with the Tigers and acknowledge the extensive amount of time he has devoted to Queensland football over a long period at senior, junior and state level, all on a voluntary basis. Danny’s involvement in the state football programme was just another example of his passion for the game and his wonderful ability to recognise talent, manage people and get the best out of them”

The Mayne Tigers say well done to Danny Craven and congratulations on receiving this recognition.