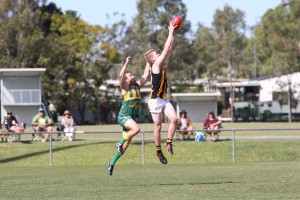 The Mayne Tigers reserves advanced to their third consecutive Grand Final today with a backs to the wall win over the Maroochy Roos who had been invincible in 2016 until falling to the Noosa Tigers last week.

After struggling all season supporting the senior squad with their best talent the reserves were able to secure a late position in the finals series. The playing squad has been decimated by injury all season and until last week neither the seniors nor reserves were able to come close to their best line-ups so it was particularly satisfying to be in the finals at all let alone advance to the Grand Final.

The Tigers were nothing if not determined to go out battling against the Roos who were on paper a far more experienced side. Once again the Fisherman’s Road venue was subject to a strong breeze providing a solid advantage to the northern end and the Tigers were forced to kick into the wind to start the game.

Whilst the Roos were first out of the blocks with a quick goal, the Tigers worked hard to respond with a running transition and goal to big man Chris Paterson. Despite it being a potential four goal advantage the Tigers were able to hold the deficit to ten points.

The opportunity to kick with the breeze was never going to be the ultimate difference but youth and determination was a big factor for the Tigers with teenager Jamie Ivers continuing his great form in the ruck and around the ground while Josh Griffiths was attracting plenty of attention to which he responded in spades.

The Tigers were able to outscore the Roos to claim a two point lead at the main break in an arm wrestle.

The third quarter was always going to be the telling period for both sides and it was clearly evident that they were each desperate to advance to the big dance next week. The score seesawed for the quarter with both clubs recording four majors and once again the margin was only three points with the Tigers just in front but looking fresh and eager to win. A towering mark and a booming goal from outside the fifty into the breeze by Chris Paterson told the story for the Tigers in the third term as they played out of their skins to hold their lead.

As always, finals are won on good defence and both sides were doing a power of work. Matt Ivers came back into the side to play a key role for the Tigers in a critical role and he was well supported by Kyle Steel whose experience was put to good purpose along with all the others in the back six.

The last quarter was another period of desperate attack by both teams with scoring opportunities missed under pressure from hard working defence and the lead going back and forth. Despite slipping to an eleven point deficit, the Tigers were able to respond with great maturity to kick away to win by ten points in an exciting finish to a great final.

The Tigers will now play the Noosa Reserves in the Grand Final commencing at 11.15am at the Moreton Bay Sports Complex in a curtain raiser to the QFA North Seniors Grand Final. The Mayne Tigers will then play the Maroochy Roos at 2.00pm in the main game to decide the Premiers for 2016 in the senior competition.