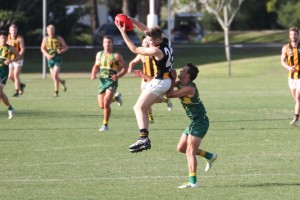 The Mayne Tigers stormed into their third successive Grand Final yesterday with a convincing victory over ladder front runners Maroochydore in their semi final match at Fisherman’s Road.

The Tigers have been playing catch up all season after a horror start but it all came together yesterday in windy conditions.

The Tigers were fortunate to kick with the wind to start the game off and they did their best to take advantage as they jumped the locals with thirteen scoring shots to three but the wind played its role to make accuracy a problem. Even so, a twenty five point lead at the first break in a final is always well received but never taken for granted especially against a quality star studded opposition.

It was the Tigers turn to face the northerly in the second term that had been their benefactor in the first. In what has been a customary and weekly acknowledgement, the Tigers have built their game on good defence but with so many avenues to goal at the disposal of the Roos, it was especially important that the visitors held strong. Tom O’Malley was at his miserly best in his battle with Paul Bevan while young gun Josh Harvey tackled and harassed his opponent to distraction. The group led by Dean Hartley have been terrific all year under tremendous pressure and once again it was their work in the second term holding the Roos to two goals which gave the Tigers a chance to go into the main break with some optimism.

However nobody expected that the Tigers would unleash a nine goal blitz in the third term sharing the goals across seven goal kickers to increase their lead to eleven goals when the onslaught was over.

The quarter started with a horrible head clash between Luke Faulkner and Nigel Baker taking both of them out of action. Faulkner was able to continue after a short break for a blood ruling while Baker had to be checked for the effects of the clash. Both men have enjoyed a great rivalry over the last two seasons and it was pleasing to see they were both able to continue for the remainder of the match.

The extent of the lead for the final term was always going to be a telling factor with the strength of the wind blowing to the goal scoring end as many a team has underestimated how well the Roos play the Fisherman’s Road ground on the back of a northerly breeze.

The Tigers were still desperate to hold the momentum kicking the first goal of the last term into the teeth of the wind but it was hard to keep it up.

In the end the Roos were able to kick five goals with one tumbling through after the final siren to the Tigers two but the gap was too much to bridge.

The Tigers will need to be at their absolute best to win their third successive grand final, a feat not achieved by the club in 92 years of their long history which includes seventeen flags. The Tigers played in nine QAFL grand finals in eleven years between 1958 and 1968 for five wins but not three in succession.

They will have a welcome break next week while the Maroochy Roos will take on the charging Caloundra Panthers to see who advances to be their foe on the 3rd September.