Tigers make their point with the Roos 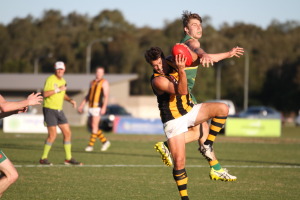 The Mayne Tigers and the Maroochy Roos met in the final home and away round yesterday at Fisherman’s Road with their positions secured at the top of the ladder. Neither club fielded their best team but there was plenty of pride on the line in a dress rehearsal for the second semi final next week at the same venue.

Coming into this, the last game, the Tigers season has been quietly on track having not lost a game since round six when they were looking very shaky to make the cut with only two wins from six outings on the board at that time while the Roos have been looking like the real deal all year and particularly since making some valuable acquisitions late in the season. Unfortunately, even though these clubs have met three times this year we haven’t seen the best of them yet so next week will be an interesting contest, assuming we get to see the best then.

The Tigers have often been good early and yesterday was no different with plenty of possession going their way and some exciting forward entries which resulted in a good return while the Roos were also ready to play also getting on the card early but were a little wayward leaving the quarter time break pretty even across the park.

The first time these sides met this year we saw an arm wrestle with the lowest score of the season for both sides and single digit goals by half time so clearly they are very evenly matched and their respective defence is first class, yesterday saw more of the same with forward entries repelled. Tom O’Malley was giving away considerable size but it wasn’t enough to keep him from playing the critical role he has done for many years while the raw youth and talent coming through in Josh Harvey is blossoming for the Tigers as he topped the tackle count and created valuable run and carry for the visitors.

The second quarter was another even affair with each side going goal for goal as the midfields worked hard to break the shackles. The experience of Brown and Brunnenmeyer for the Tigers once again accumulating possessions while Sam Paterson risked life and limb as usual to get the possession that was going to make the difference for the Tigers. As always, the experience and the penetrating kick of the Roos Josh Norman was something to behold as was a couple of his towering marks. He seemed to be everywhere as usual while Ben Cadzow was also very damaging for the Roos.

The half time break was a chance for everyone to take stock and think about the quality of the game they were attending while the teams tried to work out what might make the difference. The Tigers held a slender five point lead over the Roos with more of the same to come.

The second half was played at an increased pace with few stoppages and the midfield contest as captivating as the first half but the Tigers seemed to be getting a slight advantage with more forward entries but they couldn’t break loose even though they peppered the goals. As always the defence at either end was doing a power of work.

Still only three points in the game at the last break and the Roos had snuck in front as the Tigers squandered their chances in front of the sticks.

The final term belonged to anyone and that is how it played out as the lead changed numerous times. The Tigers Luke Faulker kicked a goal deep into time on to put the them seven points clear but it still wasn’t over as the Roos kicked a long range goal to bring the margin back to a single point just before the siren sounded to end another great game.

And we get to see it all again next week. The Tigers and Roos finished the home and away season on equal points in a fitting indication of their respective seasons.