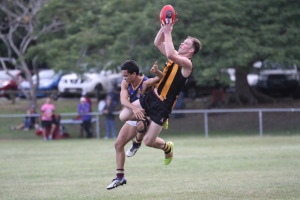 The Mayne Tigers were once again forced to play their best footy to account for a very improved Moreton Bay Lions who gave it everything yesterday in their final clash for 2016 at Mott Street.

In a very entertaining game the Lions tackled themselves to a virtual standstill but in the end the considerable effort left them with little in the tank allowing the Tigers to kick away to a comfortable win in a final quarter blitz.

The Lions claimed first blood as they stormed out of the blocks obviously determined to finish off their season in style with a number of their exciting young players showing their supporters something of what their future might look like.

The Tigers however had some troubles with their kicking efficiency as they could have made more of their opportunities with five behinds kicked in the first quarter to keep the game open. Luke Faulkner was marking everything but the radar was off the air as he kicked three of those five before getting going.

After the first break, the pace stepped up and the pressure put on by the Lions was providing the Tigers with plenty to consider as each side battled to gain the ascendency. The backlines of each side were under tremendous pressure to keep their opponents out so once again the experience of Dean Hartley, Tom O’Malley and Bill Stephens came to the fore but the apprenticeship of Josh Harvey continues to show the benefits of working in a good firm.

At the main break the Tigers had slipped away to their biggest lead of the day with a four goal advantage but the Lions were still up and about with Jonathan Giles and Corbin Dickfos particularly impressive.

The Tigers midfield led by experienced hands in Captain Caleb Brown and Coach Clint Brunnenmeyer were as usual doing their best to maintain the necessary structure to keep the Tiger train on track while Jake Magill accumulated a bag of possessions as usual in and around the contests.

The Tigers didn’t have it all their own way in the third quarter either with the Lions still chasing, tackling and applying pressure reducing the lead to under twenty points at one stage but the ship was steadied by the experience around the ground and Luke Faulkner kicking three welcome goals for the Tigers to go to the last break in control.

The last quarter was all Tigers with a steady stream of possession culminating in an eight goal onslaught from seventeen scoring shots to blow the result out. The final score was not really reflective of the game but in the end the Tigers did what they needed to do to secure the second spot on the ladder.

The Tigers travel to Maroochydore to play the ladder leaders who have been in devastating form over recent weeks with some new recruits added since the clubs last met so it will be interesting to see how the two top sides match up. This will be the final round before the two sides have to face off again in the first round of the finals series.