Mayne hang on for important win on the road 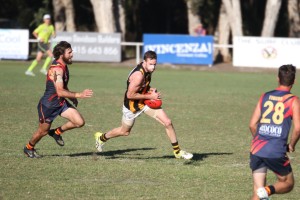 In yet another epic battle the Mayne and Noosa Tigers fought out their fourth game in 2016 right to the end to entertain a very large crowd yesterday at Weyba Road.

In a game where neither club was able to field a full strength team, nobody would have believed that to be the case with a hard fought event which ebbed and flowed all day to keep everyone on the edge of their seat not knowing what the outcome might be.

The Mayne team got out of the blocks quickly making the most of their opportunities with five straight goals with Tigers prime movers Faulkner and Brown on song kicking two apiece while at the other end the Noosa Tigers were unable to capitalise on their possession. The first break saw Mayne take a handy fifteen point lead but there was plenty of footy still to play.

The second term was all about the pressure to be applied by each backline to withstand the attack and while the visitors were still accurate with two goals, the local team squandered a weight of entries to also record two majors but a further eight points underlined the pressure. The score could have been far different but the Mayne side still held their fifteen point lead at the main break.

Noosa favourite Rob Copeland was everywhere doing his utmost to will his troops to follow him but it was also Mayne Captain Caleb Brown leading the way for his club who kept them going forward in an entertaining battle in the middle of the ground.

The half time oranges must not have sat well with the visitors as the game seemed to be ebbing away from them while the Noosa team dominated possession. The Mayne backline was under plenty of pressure but the experience of Bill Stephens, Dean Hartley and Tom O’Malley kept the damage to a minimum.

After an frenetic quarter in which Noosa were able to get their nose in front, the last term looked like it could go either way, but the momentum was surely in the locals favour as everyone paused for a welcome break. The local crowd was also starting to get behind them in fine voice.

The youth of Zac McLean and the experience of coach Clint Brunnenmeyer showed all day but it was in the beginning of the last quarter that the Tigers needed them to rise which they duly did. The tackling pressure of Jack Collings was also a critical factor in achieving the turnovers they needed.

As has been the case for many years, big game specialist Luke Faulkner was able to get his hands on the footy just when the side needed a lift and slot a game changer. The Noosa side weren’t going to lay down and there was there was plenty to play for with more advantageous top four positions up for grabs.

The Tigers went into the game with a tall side with their key big men all vying for a spot in the side in the weeks to come and it was clear that they all dearly wanted to stay. In a movement of déjà vu from last week, Mayne ruckman Luke Radonich slotted a goal from outside the fifty to break the spirit of the locals in the final ten minutes of the game to take the lead again.

Another Tiger tall in Chris Paterson played his most important game for the season as a lead up forward to give the Noosa team plenty to be concerned about all day as he provided another avenue to goal to add to the mix. It was however a towering mark in the dying minutes and a critical following goal which sealed the game for the visitors that will be remembered most by the Mayne faithful.

In a finish fit for a final both sides had expended everything. Two games to go with Moreton Bay at home and Maroochy away to round out the fixtures.