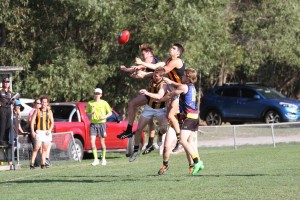 The Tigers were forced to play the last quarter of their clash against the Caloundra Panthers with only seventeen men in a very physical contest at North Street Caloundra yesterday. Coach Danny Craven praised the playing group for their most defining work of the season in a back to the wall performance on the hottest winter’s day in decades.

In an all round team performance the Tigers were able to withstand a very determined Panthers group who have challenged the competition every week to be the side most likely to cause an upset.

As has been reported all season, the Tigers have yet to field their best team and with a late withdrawal by key forward Luke Faulkner the Tigers were forced to re-arrange the side.

The pace and quality of the QFA North competition was on show from the first minute of the game once again as a shoot out unfolded in the heat of the early afternoon. By the end of the quarter which yielded eleven goals the Tigers had a three goal advantage.

The Panthers have shown that they run and spread using the full extent of the oval to run their opposition around which proved to be very effective as the game wore on but it was always going to be whose fitness would stand up best to the gruelling conditions.

The local side continued to work hard in the second quarter exerting not just run but a physical approach as well in an effort to put the Tigers off their game. The Tigers defence was under considerable duress with a weight of possession heading in their direction as the Panthers switched the football regularly to open up quick raids which has been a feature of their game all year. By the main break the Tigers were down a man and were forced to evaluate how they might take better control of proceedings.

An important factor was that the Tigers big men in Luke Radonich and Chris Paterson were controlling the air while Andrew Housego was as effective as he has always been up forward.

The Tigers lead was only a slender seven points at the main break but the mood in the rooms was composed.

The Tigers backline has been a key component of success over recent years and it was another quality effort from Bill Stephens and Tom O’Malley leading the troops to only concede two majors after the main break frustrating the Panthers efforts.

The third quarter was nevertheless a tough and bruising period as both sides attacked the ball with no regard for personal safety but the Tigers were able to capitalise best on their defensive effort to break away to a twenty five point advantage. However, it came at a considerable price with only seventeen men available for the last quarter.

It was to be a super effort by all remaining players to will the team over the line and extend the lead to 39 points for a resounding win on the road.

The Tigers travel to Noosa next week in yet another encounter with their namesakes in 2016.