Battle of the Tigers continues 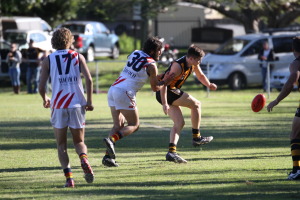 The battle of the Tigers in the QFA North competition continued yesterday at Mott Street with another tough battle between two teams in a hot contest for second spot on a crowded ladder. The star studded Noosa Tigers had won both of the previous 2016 encounters but the locals have been big improvers over recent weeks.

Mayne have been gradually welcoming back their more experienced movers but it was Tiger veteran Andrew Housego that was unavailable this week due to work commitments so supporters are still to see what might be possible with a full line up. However, coach Clint Brunnenmeyer came back into the side to add some extra experience to the midfield and the forward line to offset the Housego absence.

It was a classic high speed start to the clash with both sides throwing everything at each other with no quarter given. Typically both sides finished the first term with four scoring shots but the Noosa side were more accurate taking a five point advantage. The locals young stars in Zac McLean and Jasper Craven got them on the board and were looking dangerous.

Change ends and more of the same with the game expanding and both sides working to maximum rotations to keep the pressure on. The backlines for both teams were working overtime to repel attacking raids and launch new ones. The Mayne six were once again in sync as they worked together to keep the scoring to a minimum. Todd Banfield showed all of his experience to play his best game for the season while Dean Hartley was again everywhere across half back taking big marks and switching the ball from side to side.

The addition of Sam Paterson in the last two weeks coupled with the inclusion of Clint Brunnenmeyer has added the organisation sometimes missing this year around the middle but this was a key game and reputations don’t win critical games.

The half time break once again saw the score differential reflect the closeness of the two teams with the Noosa Tigers keeping their nose just in front by three points. Each side had scored three goals and once again had battled for every one of them.

In a complete change of fortunes the Mayne Tigers were able to take the game on in the third quarter to run and carry the footy and kick away to the biggest margin of the game. The quick entry into the Mayne forward fifty meant they were able to gain some ascendency and utilise their experienced marking targets in Luke Faulkner and Josh Caldow. The home side went into the final break with a four kick lead and plenty of confidence that they might finish the game off with time to spare.

As has been the case for the last few years, it was never going to be that easy as the Noosa Tigers came out straight away to kick the first goal and narrow the gap.

However the locals settled quickly to shut things down across the half back with Hartley, Bill Stephens and Tom O’Malley again showing the poise that has been their trademark for many years and the inclusion of Josh Harvey and Jack Gartlan has added another dimension to the Tiger defence.

The work of Zac McLean and Jack Collings in transition has created different options for the Tigers as they play roles well beyond their years.

In the end the local Tigers were able to finish off strongly to record a comfortable win.

The battle of the Tigers has one more game to play before the finals as they meet again in round 14 on the 30th July at Noosa.

Mayne have now progressed to second position with a percentage advantage over the Caloundra Panthers as the ladder continues to evolve week to week.