Tigers pushed all the way by determined Lions 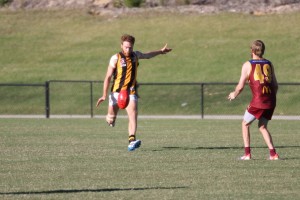 The Mayne Tigers worked hard to get over a well prepared and hard working Moreton Bay Lions at the Moreton Bay Sports Complex yesterday in perfect conditions.

The Lions jumped the Tigers from the start to kick two straight goals and set the scene for a shoot out first term. The Tigers responded with two quick goals and then the two sides traded majors for the remainder of the quarter with only the Tigers blotting their copy book with a behind to go to a seven point lead in a frenetic start from both teams.

The return to form of goal shark Luke Faulkner continues as he accumulated marks and goals in each quarter to give the Tigers an experienced target and straighten up the attack. Faulkner finished with six for the third time in four games. The strong work of Josh Caldow and Andrew Housego up forward also helped to defray the defiant defence and provide multiple options.

Sam Paterson added another dimension to the Tiger midfield and forward combinations as he returned to the senior list for the first time in 2016 to give the visitors some hustle and bustle around the stoppages.

The Tigers settled into the second quarter to inch ahead but the Lions were putting enormous pressure on them. The Lions were chasing and tackling well while their close work around the stoppages showed they have plenty to offer the competition as the year progresses.

The Tigers stretched their lead at the main break to three goals but the Lions looked dangerous and were not going to be deterred.

Both sides boast some significant pace and their respective smalls enjoyed the perfect deck to show off their skills. Jasper Craven was once again a standout for the visitors on the wing using his pace and clever change of direction to advantage while Jack Coghlan was also handy once again.

The Tigers came out after the big break to steadily accumulate on the scoreboard but it was not totally convincing as they tried to shake the Lions with both sides once again going goal for goal.

The third quarter huddle was all about finishing the game off as quickly as possible but the Lions weren’t finished yet as they kicked the first goal in lightning fashion.

However the Tigers snuffed out the challenge with the play camped in their forward half for the remainder of the game kicking three goals after a mountain of possession to finally put the opposition to the sword and record a hard fought win.

Once again the competition threw up a solid challenge to keep everyone on their toes. The ladder is now very congested with Maroochy on seven wins followed by the Tigers, Noosa and Caloundra all on six wins with six games left to finish the home and away rounds.

The battle of the Tigers continues with a home game against the Noosa Tigers this coming Saturday to see who might be able to claim second spot. Caloundra play Aspley at home while Maroochy play Moreton Bay just to keep things interesting.

Come along and watch the battle of the Tigers this week at the Den and cheer the boys on.