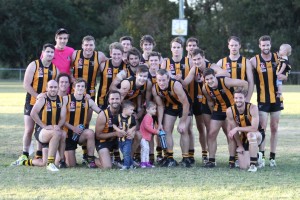 The Mayne Tigers were too strong for the Caloundra Panthers yesterday at the Den in a battle of the mosquito fleets with both sides small men dominating the game.

The Tigers will be very pleased with the win on the back of an all round team effort with everyone contributing to hold a consistent lead for the full eighty minutes.

In a tribute to club champion Luke Faulkner, making his 100th appearance for the Tigers, the team were determined to make sure it was a memorable occasion for him. Faulkner missed a few opportunities early highlighting even Champions suffer from some nerves but he was able to finally celebrate with two important goals in the last quarter to cap off an emotional but great day for him.

It was however Jasper Craven who set the Tigers alight with a dominant performance around the ground and deadly in front of goal, kicking four majors.

Jack Coghlan continues to improve every week capitalising on his speed to be very damaging around the middle which was critical against the pacy running Panthers while Zac McLean also stretched out his run of good form in and around the middle to give the Tigers plenty of drive.

Consistency is the name of the game now as all the competition works to hold their ladder position so the young but experienced Jack Collings solid form in the middle and up forward will be essential to keep the Tigers on an upward path. Collings composure was a key factor in the way the game played out yesterday as he took a number of contested marks at critical times in the game and delivered with precision.

Whilst the backline was missing the in form Bill Stephens, the inclusion of Jack Gartlan compensated to hold out the determined Panthers. Overall the backline held up very well once again with the experienced Murtha and Hartley both high in the possession count while being efficient and effective as usual.

For the second week in a row, Danny Evans came to the coaching group’s attention with his continued high work rate to fit into the midfield and other essential roles. His long apprenticeship in a key role for the reserves has served him well and he now looks to cement his place in the ones.

Whilst the Tigers went to the lead early in the game and were never headed, they were unable to shake the determined Panthers who were never more than five goals away. They flew out of the blocks quickly in the beginning of the last quarter to score a quick goal and looked dangerous however two goals to Faulkner settled things down and the quarter played out from there for the Tigers to record a welcome four goal win.

Thanks to an unexpected but convincing win by the Moreton Bay Lions over the Aspley Hornets, the Tigers have now slipped into the four on percentage. This makes next weeks game against the Hornets a crucial must win game for the Tigers to solidify the place in the four.

The game will be played at Graham Road and should be a cracking affair.