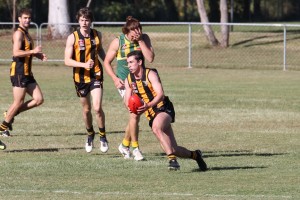 The Mayne Tigers pulled off an exciting and somewhat unexpected victory over ladder leaders and premiership favourites the Maroochy Roos yesterday at Mott Street after an inspiring session with the club’s 100 game heroes.

The Mayne Football Club came together in their 92nd year with their annual reunion day which encompassed many great themes including the anniversaries of their 1966 Senior, 1976 Reserve Grade and 1986 Colts Premierships and the unveiling of Past Players and Supporters Club projects. Those projects were the completion of the Tiger’s changerooms with plaques immortalising 100 and 200 game milestone players and new plaques for club champions that have won league medals.

The attendance of club champions in the dressing room for the pre-match meeting was a highlight with Coach Danny Craven creating some tremendous theatre for everyone which clearly inspired his charges to excel. A chorus of the club’s traditional anthem sung by everyone pre-game was a highlight which many old and new Tigers will cherish for some time.

Young men meeting old faces who had taken their jersey number to the greatest heights and the importance of the moment added gravitas to the occasion.

The Tigers entered the playing arena with steely determination that their much fancied opponents could not have expected. Whilst the club has struggled significantly with injury over recent weeks, the increasing belief in the group is a factor which the coaching staff continue to engender and encourage.

The game kicked off to a cracking pace with the Tigers out to an early lead which was whittled down by the first break to see the visitors a shade in front. The most exciting aspect of the first quarter was club favourite Luke Faulkner’s season breakout with five kicks and three goals to set the scene for his afternoon.

The second quarter into the breeze was always going to be tough but the work in the middle by Captain Caleb Brown and Zac McLean on the back of some solid ruckwork and contests by Chris Paterson and Luke Radonich against more fancied performers meant the Tigers were always going forward.

Down back the ever reliable Bill Stephens was taking his already stellar performance this year to a new level. He had plenty of support from his back six team mates carrying out their roles with workmanlike precision. Josh Duffy played his best game for the club to also lower the colours of his much larger opponent.

By the main break the Tigers had kicked away to an eleven point margin and it was evident that there was some reason for thinking that an upset was possible.

Despite the blustery conditions the Tigers were kicking straight, something which has eluded them this year so they were making the most of opportunities while the Roos radar was not so certain.

The third quarter was an arm wrestle as had been the previous contest with Mayne the only side to kick a major for the term. The scene was again set for a climactic finish with supporters on both sides holding their breath as to whether the Tigers could hold on or could they be overtaken.

By the mid point of the quarter the answer was clear as the Tigers corralled the football in their half for the entire time and had kicked away to a solid lead. The Roos kicked three late goals but the home side kicked the sealer to enjoy the cheers of the reunion crowd.

Bill Stephens was awarded the much cherished Mick Nolan Medal for the Best Mayne Player in the game which remembers Mick’s passing and significant contribution to the Mayne Football Club. The award was once again presented by Mick’s widow Nettie, an equally iconic figure in the Mayne story.

The team will enjoy a week’s break for the representative game weekend and look forward to the clash with Caloundra on the 11th June.