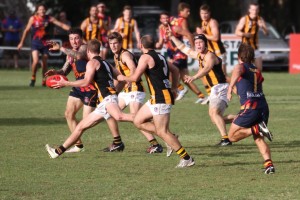 As good as the medical situation was over the last two years at Tigerland, the situation is at polar opposites now with the casualty list growing by the week. The Mayne Tigers met their coastal cousins at Noosa yesterday in what was hoped to be a battle of the big cats but the visitors were undermanned for body strength and experience. However, it was a very brave effort and one that showed the club has plenty of fight in it.

The locals got off to a strong start catching the Mayne team off guard to kick away to a four goal lead at the first break with the experience of Brent Maloney up front kicking three early goals making a significant difference. He was aided by the experience and quality delivery of his midfield with the return of Noosa veteran Cubby Isles.

Mayne were only able to record two goals to the main break leaving themselves eight goals in arrears and plenty of work to do and some big gaps to plug. However, as has been the case all year, the youth brigade have had to stand up and be counted and that is certainly what happened yesterday.

Zac McLean took his leadership status to new levels with a strong showing in numerous roles while Jack Coghlan made the most of his extraordinary pace and opportunities to record three goals as a small forward and rover to play a role well above his years.

The majority of the team is now aged below twenty three years but the maturity of the effort in the second half provided credence to the faith shown in these boys. The third quarter saw the visitors blossom to kick five goals and match the Noosa Tigers in a very entertaining quarter of fast footy. Two consecutive goals emanated from textbook ruck work by Chris Paterson and centre clearances from Jack Collings and Jack Coghlan with pinpoint delivery to the tall forwards of Faulkner and Thompson who both capped off the plays which all bodes well for the future and will keep supporters coming back for more.

Jasper Craven also played another consistent game keeping himself busy in and around the contest while Byron Parish was cool and creative in his efforts to keep the Tigers going forward.

Whilst the backline isn’t stocked by the experience of recent times, there is plenty to like about the group with Bill Stephens taking on the leadership role in this group and showing the way every week. Once again youth is changing the face of the team with Josh Harvey growing in confidence each week to take on more challenging opponents in defence.

In the end the Noosa Tigers were too strong and recorded a well deserved win. The sides will play two more home and away games before the season is out so we look forward to the next encounter of the big cats!

The Tigers head home next week to play the Maroochy Roos in an important clash coinciding with the Tigers Reunion Day celebrations. The Tigers will be expecting a big crowd as they recognise their 1966 senior premiership, 1976 reserve grade premiership and 1986 colts premiership teams and acknowledge their 100 and 200 game milestone players as well.