Tigers make it two in a row 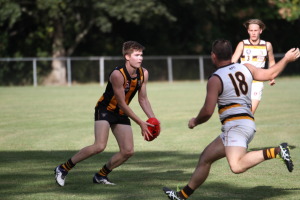 The Mayne Tigers secured another win in the QFA North competition to sneak into the four at the completion of the first round of fixtures. They got off to a slow start against the Aspley Hornets at Mott yesterday but quickly righted the ship to go into the first break with a two goal advantage.

The Tigers were never headed from there with a solid performance against the equally young local rivals.

The experience of Caleb Brown around the middle made some of the difference with another polished performance which included the necessary leadership in and around critical contests.

Zac Mclean played his best game this year which started from the first bounce with twelve possessions in the first quarter and a consistent performance from there.

Bill Stephens once again led the back line with a determined effort to hold the Hornets to a miserly five goals to the end of the third quarter.

Dean Hartley continues to prove his versatility with a switch to the forward line finishing off with an important two goals while Fraser Thompson put in a tireless effort as a lead up forward giving the Tigers multiple targets.

Young speedsters Jack Coghlan and Jasper Craven also set the pace against their small counterparts to create some lively action which both sides supporters would have enjoyed. Team leader Jack Collings has developed into a critical midfield player with his physical presence an important factor in the Tigers success and yesterday was a typical effort from this reliable performer.

The game finished with a shoot out from both sides with each recording four goals in the last quarter in an entertaining local derby.

This game finished off a perfect weekend for the Tigers with four wins from four starts for the senior teams.

The second round of games starts next week with an away clash with the Noosa Tigers. The Mayne boys will be looking to get over their Sunshine Coast namesakes to secure a spot in the four.