Tigers hang on for the win 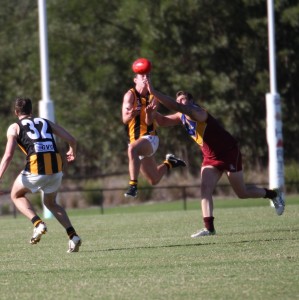 The Mayne Tigers struggled to shake a determined Moreton Bay Lions team at the Moreton Bay Sports Complex at Burpengary yesterday. In the end the Tigers were able to come away with the four points but it wasn’t the game they had hoped to play with the Lions refusing to give in to the last as they recorded the final two majors for the day.

In another game where injury, availability and circumstance meant the Tigers were down on strength it was pleasing for all concerned to be able to head home with the win.

The game started with the Lions quickly taking the lead and looking like they were going to make the most of their chances with both sides yet to record a win. However the Tigers were able to steady the ship and go to the first break with a slender one point lead.

The return of Caleb Brown and Luke Faulkner added the extra experience that was missing last game giving the Tigers some advantage which proved important as the game went on. Brown in particular was exceptional when in the middle or up front where he finished with three goals.

The defence was stretched with the size of the Lions up front however as usual Bill Stephens played above his weight class to be one of the Tigers best.

Around the middle an experienced and agile Jake Magill accumulated possessions at will to push the Tigers into attack with regularity.

Up front the Tigers missed a number of opportunities with poor kicking despite achieving a dominance in forward entries, something that will continue to be a focus as the season rolls on. The side did however accumulate their largest score this season which will add confidence for the weeks ahead.

The young brigade were well served by a speedy Jack Coghlan and Jayden Jones who hit some form that has been building over recent weeks.

The Tigers will return home to the Den next week to take on the Aspley Hornets who have been big improvers in 2016 rounding out the first round of the year in what is shaping as a much more even competition.