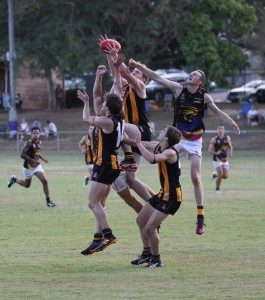 The Tigers returned to the Den for the Anzac weekend clash with the Caloundra Panthers on the back of a strong road trip performance but the absence of more experienced players proved difficult to cover.

The Tigers youth policy has been a revelation this season and will prove to be the case in time to come but the right blend of experience was what was needed yesterday. The Tigers welcomed the return of big man Andrew Housego for 2016 but missed the experience of Brown, Faulkner and Murtha who all had other business to attend to interstate and overseas.

The Tigers lost Jack Collings early to a head clash which meant on ball rotations once again had to be re-engineered in the first quarter of the third game in a row. Despite this the Tigers were determined to make a contest against a much improved Panther outfit.

It was another low scoring defensive affair with the Tigers once again relying on the back six to keep them in the game. Dean Hartley continued his consistent form in leading the backline to be Mayne’s best player but as usual he received tremendous support from Bill Stephens.

At half time the Tigers were well in the game with barely two goals separating the two sides and plenty of hope that they could bridge the small margin.

Playing coach Clint Brunnenmeyer was doing everything he could to eke the best out of his young charges around the ground in another lead from the front effort as he moved from the midfield to the forward line keeping everyone focussed.

The game continued in scrappy dogged fashion for another quarter with neither side able to break away however the Panthers went into the last break with a four goal lead and confidence that they might run over the young Tigers.

However it was the youthful Tigers that stepped up in the last quarter with Craven and Coghlan getting plenty of the footy to keep the supporters hopes alive. A quick run of goals and the margin narrowed but it was too late as the more experienced Panthers steadied the ship to take the game out with a well deserved win on the road.

The competition will take a break next weekend and the Tigers will head up to Moreton Bay on the 7th May with the expectation of the return of several old hands.