Roos up in arm wrestle 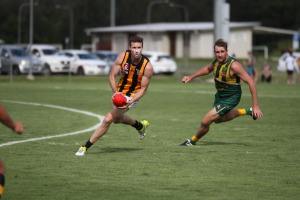 The grand final replay is always a much anticipated event with plenty of expectation on both sides to perform to the standards set in previous encounters. The Tigers brought a new look team to the contest with the Maroochy Roos and one with plenty of new and young talent to test their mettle. After four tight quarters, it was evident that both sides came to play and the prize was still very much a highly valued commodity.

The Tigers celebrated the 100th appearance of Taylor Murtha and welcomed another debutant in Jack Coghlan to the group adding some extra importance to the clash.

The game started at a frenetic pace with both sides attacking the contest without fear and there was no respite for the next twenty five minutes. Each side had hit the scoreboard four times and the locals enjoyed a small advantage but seemed to be full of confidence that they had the measure of the visitors.

As has been the case for two years the battle rages across the middle and the backlines where each claim advantage over their respective rivals. Evergreen Caleb Brown racked up possessions at will while Dean Hartley was impenetrable down back working in tandem with Bill Stephens despite a significant height disadvantage.

The second quarter served up more of the same as the Tigers tackled themselves into the game bringing some big bodies to the ground in one of the most exciting quarters of footy any fan could hope to enjoy.

Youngster Josh Griffith slotted the Tigers first goal late in the second term to amazingly bring the team to within three points of the Roos at the main break such was the grip that the defence of both sides had put on the contest.

The question was which side was going to come out after the break to take control of the game.

To the delight but stress of both sides supporters the third quarter was just as tight as the first half but the Tigers did sneak away to a small lead with a three goals to one quarter but inaccuracy in front of goal once again meant that they could not ice the game.

The game was there for the taking but it was a long way from over. The Tigers still held that same lead with ten minutes to go put the pressure had been building. In the end the Roos slipped the noose and kicked away to a nine point win.

It was a big day for both sides and evidence of the quality of the competition despite the small field.