Patience pays off for Tails 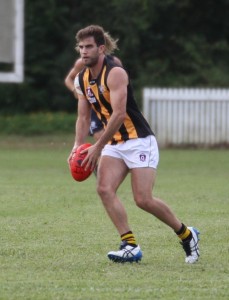 Taylor Murtha will play his 100th senior game for the Mayne Tigers this Saturday after making his debut as a raw 17 year old in 2007. After starting his footy for the club in under 12’s and experiencing a premiership in his first season, Taylor has been a life long Tiger.

He played two seasons as Captain of the Mayne Colts doubling up in the seniors on numerous occasions to make sure the club fielded quality teams and he could support his friends.

Over the years he has played a utility role for the club at either end of the ground in key positions and running roles given his natural athleticism. He has even played in the ruck on occasion evidencing his versatility.

It seemed as though he might reach this milestone in 2014 but luck intervened when he broke his leg mid season taking away his chance to play in the club’s drought breaking premiership. Typically he took adversity in his stride helping the team out with any task required to still be part of the group. In 2015, he suffered a series of niggling complaints while trying to regain his best form and whilst he missed his second chance at a senior premiership he was able to celebrate with a premiership in the reserves.

In his fifteenth season for the Tigers since that early junior premiership, Taylor is now one of the most respected players at the club, not just for his on field talent but also his agreeable and helpful nature off the field.

Evidence of the esteem with which he is held is exemplified by the following thoughts and well wishes of his team mates who have played alongside him for many seasons.

Really glad to hear that Tails is going to be playing his 100th for the club, especially considering his long association with the Mayne Tigers. What can I say about Tails:

I remember his first game as a skinny 17yo kid. He was blessed with tremendous speed and beautiful long kick, but over his time at Mayne he has proved to be much much more both on and off the field and I have enjoyed watching him come back from the disappointments of injury to again be playing some really good footy. Being a good friend of Tails' away from footy makes it even more special to see him reach his 100th. Well done to him and I'm glad I will be there beside him like I was in his first game. Brownie.

It's a genuine pleasure to see Taylor reach this fantastic milestone. I've watched him mature from a shy, but very well mannered kid into a confident and extremely likeable young man. You wouldn't meet a nicer bloke and despite his misfortune in missing 2 senior grand finals, his commitment has never waivered. He is blessed with tremendous athletic ability and still having the benefit of youth on his side, I'm certain we're still to see the best of him. Congrats Tails on this tremendous achievement and although I won't be taking the field with you for this one, I look forward to playing alongside you for as many more as time will allow.

A fantastic achievement for such a young player to get to 100 games.

Tails is a modern athlete who is fast, talented and fit. He kicks the ball long and is just a hard player to match up on. Nothing worse than lining up on someone like Tails at training through the week.

I wish him all the best for what is a wonderful event playing 100 games for such a great club.

Having played in most of Taylor’s 100 games I have been witness to his natural ability to play in a variety of positions and steady improvement each year. He has been unlucky with injury throughout the first 100 games. Tails has an enormous amount of talent and I think the best of Tails is yet to come when he strings together a few injury free seasons. Tails, I wish you all the best for your 100th game and no doubt you will play your role and come away with the win. Fergo

Since I joined the club in 2012, Tails has been a prominent senior player. He has always impressed me with his natural ability and athleticism. His speed, marking ability, and long kicking are features of his game. Some serious injuries have impaired him over the years, but his commitment to the club always results in him coming back a stronger player and more determined. It has been a pleasure playing along side him. He is a true teammate and friend. Well done Tails on a 100 games, a great effort!

Tails has been an influential figure in my footy life, extending back to junior days. He welcomed me to the backline in my first couple of years of Senior footy and has been a thrill to watch in full flight. Highlights include his regular full-field running goals and the number of times he has saved my skin with a covering spoil in defence. I am very happy to see him reach this milestone after a bad run of injuries in the last few years.

I first came across Taylor as a very skinny 16-17 year old playing under 18’s for Mayne, whilst not overly developed at that stage it was quite evident what a good athlete he was and you could see that he was going to become a good player with time. Being only a year or two apart in age I was fortunate enough to play alongside him for most of his 99 games and whilst we had some tough days on the field Taylor was never overawed by the challenge that he was given each game. As with any young guy the consistency wasn’t there early days you could see the quality that Taylor possessed as a player and person, which has led to him being one of the most respected members of the club ever since. A breakout season as an attacking defender justified the potential that a few people at the club had seen in that skinny 16 year old kid. Unfortunately the injury curse struck in the years following but I always admired his team first attitude and willingness to help the club in other areas especially during a time when the club was having success that hadn’t been experienced in many years. I was so happy that Taylor got to experience playing in the winning Reserve Grade team in 2015 after the heartbreak of missing altogether through injury the year before. Congrats on finally making the 100, I’m sure there are plenty more ahead!

The thing that sticks out to me when it comes to Taylor is his raw athleticism, versatility and willingness to do whatever the team needs. Since his debut, I've seen Tails play just about every position possible, such is his ability to do just about anything on the football field. He is a great athlete and when in full flight damn near untouchable. I remember a number of times Tails running the field from full back to full forward and not one person laying a finger on him before launching into a shot from 60 meters out. While his attacking play is so good, you can always trust on Tails to do the one percenters - whether it's running down his man or spoiling the ball with a strong fist to the boundary. Congratulations Tails on reaching 100 games.

Taylor has been one of the most loyal Tigers I have played with. On the field he is very athletic and talented player and can play any position on the ground and dominate when he is on. He has been unlucky with injuries at the wrong time of the year the last two years and is very unlucky not to be a dual premiership player. Off the field he is happy to talk to anyone and always makes new players and the younger players feel welcome and he has played a big part in developing the Tigers culture we have.

He is still only young so I am expecting big things from Tails this year and in the years to come, including, hopefully, a senior premiership which he deserves as much as anyone.

It’s a huge effort to make it to 100 senior games, congratulations Tails.