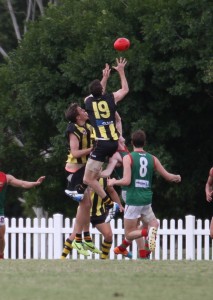 The weather was the star of the show yesterday at Yeronga with a blistering day of heat and humidity dominating affairs in conditions more suited for the beach.

It has been a couple of years since traditional rivals Mayne and Sandgate played off so there was much interest to see how both clubs were going to perform against each other in the Alpha Sports Cup Pool B Final.

The first quarter set the scene for the day with both clubs slugging it out around the middle and in turn the backlines for each team repelling most efforts leaving neither side to gain the ascendency. After a very even term both sides went to the huddle with 2 goals and 2 points to their credit and no sign of a break to come.

The Tigers were going forward on the experience of Sam Paterson while the Sea Hawks were well served by the dominance of Tom Overington, both of whom excelled in the conditions.

The second term was an even more dour but enthralling affair with only one goal scored by Sandgate for the period while Mayne continued with their inaccuracy of recent weeks to advance with a flurry of behinds.

The game progressed after half time in similar style with both sides working hard but unable to break clear of their opponent. At the final break only two points separated the teams.

Dean Hartley had been a rock in defence for three quarters as he lead the back six in a customary miserly effort supported by Bill Stephens.

The last term was time for the experienced to step forward but both sides were of similar mind. As might have been expected it only took a slight break to gain some ascendency and it was the Sea Hawks midfield that stepped up a cog to sneak away to just enough of a lead to take out the game.

It was a fitting final between two old rivals who both did their best to take out the Cup.

The coaching department will be well pleased with the work undertaken by the youth of the squad as they continue to look to the future.

The Tigers will take a break over Easter and look to Round 1 on the 9th April against Noosa to get their year up and away.