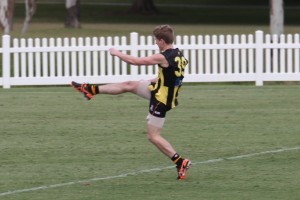 The Tigers were slow starters but gradually got on top of their opponents to storm home in the last quarter to advance to the Pool B final of the Alpha Sport Pre-Season Cup next week against northside rivals Sandgate.

The Tigers were well pleased once again with the youth aspect of the squad yesterday who all continue to improve to challenge for permanent positions in the senior team.

Mayne also played a practice match in the reserves taking out a narrow win against Coorparoo in hot conditions once again while the Colts played Morningside at home in a valuable hit out for both clubs in good pre-season spirit with lots of future talent on display.