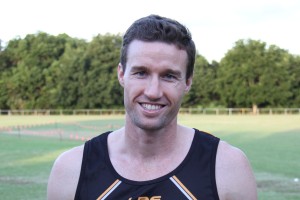 The Mayne Tigers are very pleased to announce that Caleb Brown will lead the club into the 2016 season as Club Captain, the fifth consecutive year that he has performed the role.

The Captaincy was announced yesterday at the club pre-season training camp at Samford along with the club leadership group by coach Clint Brunnenmeyer.

Caleb will enter his fifteenth season of football with nothing left to prove but still plenty of passion to lead the Tigers into their third season in the QFA North competition on the back of consecutive premiership achievements.

Proving that good players get better with age, he had a stellar year in 2015 taking out the Mayne Tigers Mick Nolan Medal, 2015 Duncanson Medal (League Medal), the 2015 Mick Nolan Medal for best and fairest in the grand final and the club Runner up Best and Fairest.

And, as if that isn’t impressive enough, on top of all that, he has represented Queensland at State League level in 2011 as well as numerous other State Representative teams at Community Football level over many years.

Mayne obviously hold this great Tiger in high regard and will be very pleased to see him lead his charges out on to the field again this year.