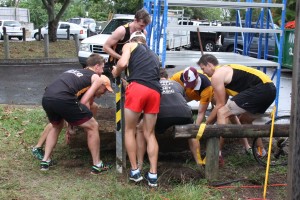 The Mayne Tigers training squad followed up an early morning training session with a traditional working bee which will see the Den spick and span in readiness for the season ahead.

A squad of fifty players joined the committee this morning to complete a wide range of jobs that could not have been possible without such a large contingent of youthful and enthusiastic labour.

Club President Russell Ditchburn complemented the coaching staff and the players for their fantastic support and for the manner in which the lads worked together in various groups to systematically complete their allotted tasks.

The Tiger changeroom is getting a makeover to increase the feeling of club spirit and home room ownership and pride. There is more work to be done in this space however the boys are well on the way to making it a real Tiger’s Den.

Another important job to complete was the repairs to the vandalised coaches box which were only recent installations so great to see them back up and running in readiness for the first game. Meanwhile others moved metres of soil recently excavated for the new equipment shed and the water bore to much needed locations. Demolition skills were needed to pull down the old mower shed now that the club mower is housed in the new shed.

The club hired the largest skip available and at day’s end it was almost overflowing.

Graham Walters, Mayne long time club patron quipped “it was the best attended and most successful working bee I have ever attended”. Not a bad statement for someone who has almost fifty years of continuous involvement with the Tigers.

Overall a great day for the club with plenty of mateship shown and team bonding along the way.

The players will attend a weekend training camp this coming Saturday at the Baden Powell Camp Grounds at Samford to further bond new relationships with new recruits in readiness for the upcoming season.