Dynamic Duo to Coach the Tigers in 2016 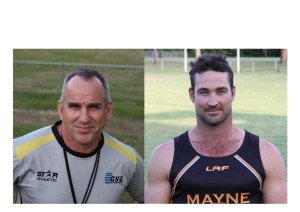 The Mayne Tigers President Russell Ditchburn was on hand at tonight’s training to announce to the playing group that the club had appointed two co-coaches to lead the Tigers into their quest for a three-peat in 2016.

In a coaching first for the Tigers, Ditchburn announced the coaches would be Clint Brunnenmeyer and Danny Craven who would share the responsibility for leading the club into next season. He stressed to the players how fortunate the club was to have ongoing continuity with both coaches already cemented in the club culture but also the significant depth of experience which both men brought to the role.

Craven has lead the club’s Performance department for two seasons now providing the club with drought breaking premiership wins for the two senior grades from consecutive appearances. Craven has been instrumental in recruiting coaching talent as well as adding key players to the list. Craven’s experience goes back to an impressive AFL playing career at the St Kilda Saints and the Brisbane Bears. Furthermore, his senior coaching credits includes two QAFL premierships with West Brisbane and Mt Gravatt.

Brunnenmeyer can also claim considerable experience with a playing career including stints at the Lavington FC in the Ovens and Murray League and the Railways Panthers in the Kalgoorlie League. He was runner up in the league medal in Kalgoorlie in 2012 as well as best and fairest in the 2012 and 2014 grand finals where the club recorded premierships in each year. In a welcome move to Queensland in 2015 where he teamed up with long time friend Shaun Daly, he was a member of the Tigers premiership side. Brunnenmeyer has prior assistant coaching experience at the Railways FC and more latterly at the Walla Walla FC in the Hume League.

Brunnenmeyer will direct traffic on the field as a playing coach while Craven will utilise his wily skills and experience as he leads the bench team. Craven will also continue to lead the Performance department as Director of Football.

Pre-Christmas Training will continue until Thursday 17th December and then recommence in mid January. Players, past, present and new are encouraged to get along and join in the action.