Duffy signs on to lead the reserves 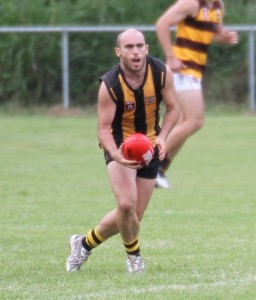 The Mayne Tigers are pleased to announce the appointment of a new reserve grade coach for 2016.

The position has been awarded to Josh Duffy in the form of a playing coach. Duffy came to the Tigers with long time friend Shaun Daly in 2013 from Albury after playing for the Howlong Football Club in the Hume League.

Duffy played in the 2014 Tigers Senior Premiership team and the 2015 Reserve Grade Premiership team. He has also been an active member of the Tigers Social Committee since joining the Tigers exemplifying his inherent club spirit.

In a rare example of club commitment these days, he has been coaching an Everton Wolves junior side over the last two years and has also been coaching school representative sport while juggling work commitments and his own training schedule.

Duffy wasn’t daunted in taking over the role from the legendary Nifty Miller who took the Tigers to consecutive premierships in 2014 and 2015. Miller has been a huge asset for the Tigers and leaves behind a great legacy for others to follow and Duffy is keen to emulate the great man and do his best for the Tigers in 2016.

Duffy is a teacher by profession and brings a wealth of experience, passion and organisational skills to the role.