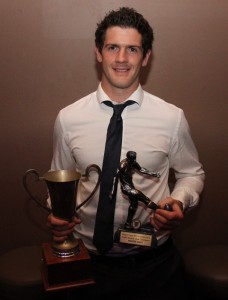 Mayne Tigers coach Shaun Daly capped off a whirlwind three year stint at the club by taking out the Keith Beavis Club Champion trophy for the third time last night.

Daly polled 138 votes from 17 games to win the award, with the runner up Caleb Brown next on 93.

Daly has been a revelation at the club after coming to the Tigers from Albury in 2013, taking out this award in that year and following it up with dual premierships in 2014 and 2015 leading from the helm.

Daly paid tribute to the support he received from the entire club and thanked a number of people in a detailed personal account of the support he accredited to the enjoyment and success he has had while in Brisbane. Daly will be returning to Albury with his partner Steph Park who came to Brisbane with him and has also made a significant impression on the Tigers with her volunteer work on the club committee. Park was also presented with an award in recognition of her efforts.

The Mick Nolan award for Player’s Player went to Spencer Greville in recognition of his season. This award was presented by club legend Rod Barber who in typical fashion celebrated his 45th wedding anniversary with wife Glenda by attending this event.

In a look to the future, the Mayne Tigers Rising Star award and the Everton Districts Sporting Club Award went to Jasper Craven for his very successful debut year at the Tigers capped off with a premiership medallion. Craven is a former Everton wolf and one of the new pack of young players making their mark in the Tigers ranks.

Other awards presented to the senior team last night were;

The night was held at the Hamilton Hotel, a venue that is fast becoming the alternate home of the Tigers with a number of events held there this year in recognition of their sponsorship and support.

In other reserve grade awards