Back to Back for Tigers 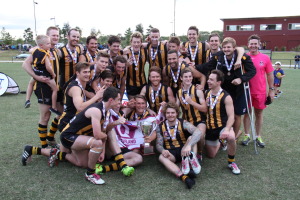 The Mayne Tigers managed to hang on against a late charging Maroochydore to record a three goal win to go back to back and win the 2015 QFA North Grand Final.

The Tigers appeared to be cruising to a comfortable win as they had accumulated a seven goal advantage mid way through the third quarter but the game was far from over as the Roos found their way to narrow the gap to thirty two points at the last change and were very confident that they would run over the top of the reigning premiers.

The Tigers had all the possession in the first half of the final stanza but could not ice the game. The Tigers had kicked one goal but a wasteful seven points to keep the opposition hopes alive.

The Roos kicked right into gear and made the most of their opportunities with diametrically opposite accuracy to get to within five points of the Tigers.

The Tigers were able to steady the ship with a goal to Luke Faulkner and then go on to kick away to a nineteen point win against a side that had troubled them all year and will likely go on to bigger things in years to come.

But for this weekend and this year the Tigers are back to back premiers, a result that could not have been imagined a few years ago.

The Tigers were well served by their entire twenty two players with the coach Shaun Daly and the captain Caleb Brown leading from the front from the beginning to the end.

Caleb Brown was awarded the Mick Nolan Medal for the best and fairest in the grand final. The medal was presented by Nettie Nolan making for a great moment for Caleb and the Mayne Football club.

The club will hold its Club Champion Night at the Hamilton Hotel this coming Saturday night, the 19th September 2015 commencing at 6.30pm.