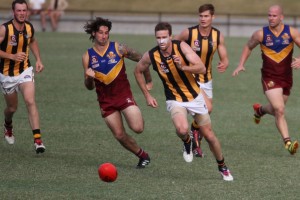 The Mayne Tigers Captain Caleb Brown was crowned the winner of the Duncanson Medal for 2015 at the Queensland Football Awards tonight at the Gabba after polling the most umpires votes in the QFA North competition. Brown shared the accolades with Jarrod Gale from the Maroochy Football Club with 19 votes apiece. Each polled in their respective last competition rounds to finish up at the top of the leader board.

A typically humble Brown was very pleased to receive the award but played down his stellar season in the midfield where he has once again shown his versatility after previous seasons in the backline and on occasion up forward.

Brown follows the success of Luke Faulkner who took out the same award in 2014.

In a very successful night for the Tigers, Luke Faulkner was awarded the medal for the highest goal kicker for the second year in a row in the QFA North Senior competition with 67 goals in the home and away season.

Matt David took out the highest goal kicker medal in the QFA North Reserves competition with 42 goals, shared with Patrick Corbett of the Caloundra Football Club.